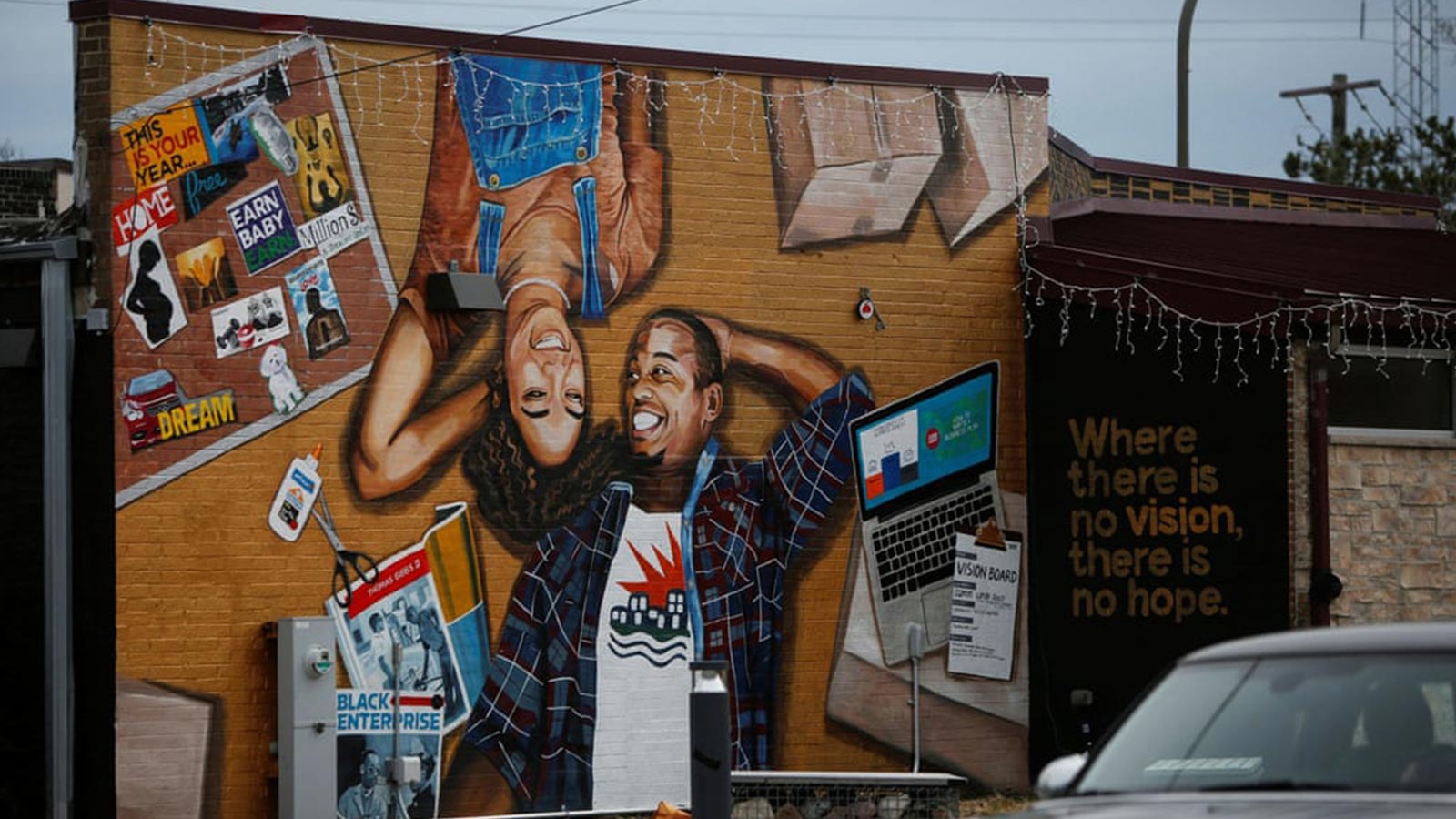 Evanston was the first city to implement a plan to repair the harm caused by slavery – and what occurred there could set the tone for what may happen at a national level.

By Kiran Misra, The Guardian —

In March, Evanston, Illinois, beat the federal government to become the first to pass a reparations plan in America. It gained national attention, heralded by celebrities such as Danny Glover, who called the debate over reparations “the most intense conversation that we’re going to have in the 21st century”. But just months ahead of putting it in action, local residents are warning national advocates to view Evanston as a cautionary tale as much as a historic first.

“There’s still so much misinformation or lack of information that Black residents here in Evanston still don’t understand what this program is. And there are plenty of Black residents that still believe that they’re going to be getting direct cash payments, because that’s how the reparations program was framed when it was first introduced in 2019,” said Sebastian Nalls, a Black Evanston resident and one of the founders of Evanston Rejects Racist Reparations, a group formed in February 2021 to draw attention to community concerns with the reparations plan.

There’s also the problem that most of the thousands of people who were negatively affected by racist housing policies in Evanston will never see a check.

The Evanston plan would provide housing grants to qualified Evanston residents using funds from cannabis sales. Since Evanston currently has $400,000 in its Restorative Housing Program fund, if each applicant received the maximum $25,000 grant amount, only 16 families or individuals would be receiving a check in late 2021. For those who do receive the money, $25,000 makes a small dent in the cost of buying a house in Evanston, where the average house sells for about $300,000. Later this summer, applications for the housing grants will open to the city’s Black residents. The city intends to select recipients from the applicant pool through a random lottery.

How this all unfolded in Evanston could also set the tone for what may happen at a national level. 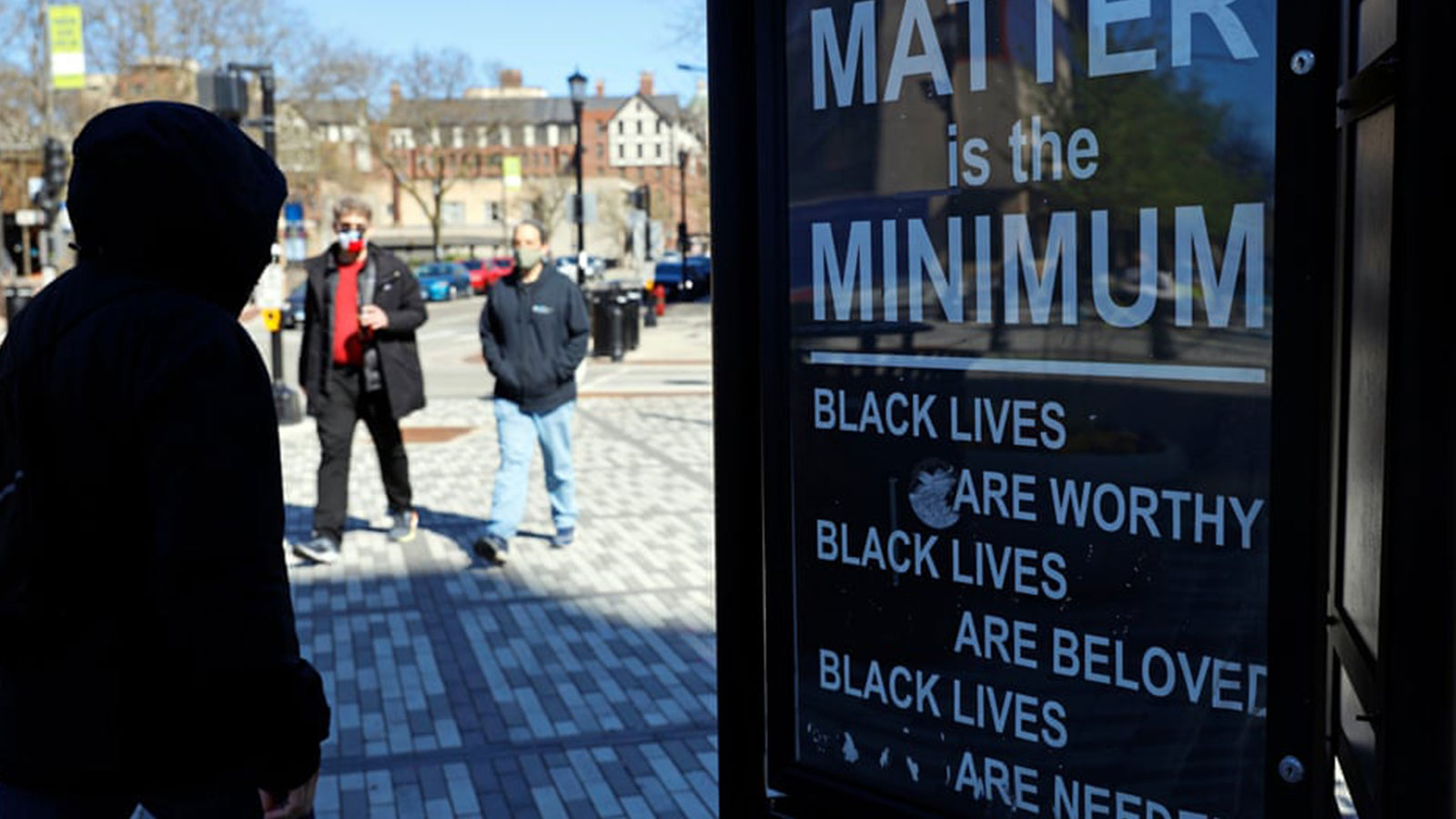 A sign in Evanston reads ‘Matter is the minimum’. (Photograph: Shafkat Anowar, AP)

The debate over what form reparations should take – and who would benefit – has plagued conversations about compensation for formerly descendants of enslaved people across the US. Nationally, the late US representative John Conyers Jr worked to pass a reparations bill through Congress for more than 30 years. In April the House judiciary committee passed HR 40, introduced by Representative Sheila Jackson Lee.

Supporters now wait for the bill to be placed on the legislative calendar by the speaker of the House and House majority leader for a full vote. If passed, the legislation would be the first step in making national reparations a reality.

Evanston first started discussing reparations in February 2019, when Alderman Robin Rue Simmons introduced the idea of passing a reparations ordinance to the city equity and empowerment commission, which is staffed by mayoral appointees.

Over the next several months, the commission worked to gather community input into a potential reparations plan. In November 2019, a proposal committing $10m in future tax proceeds from recreational cannabis sales tax to a reparations program passed through the city council. In a star-studded celebration, the city rejoiced in getting one step closer to repairing the harm done to its Black residents. More than a year later, the city council voted on a separate proposal to choose housing grants as the first reparations 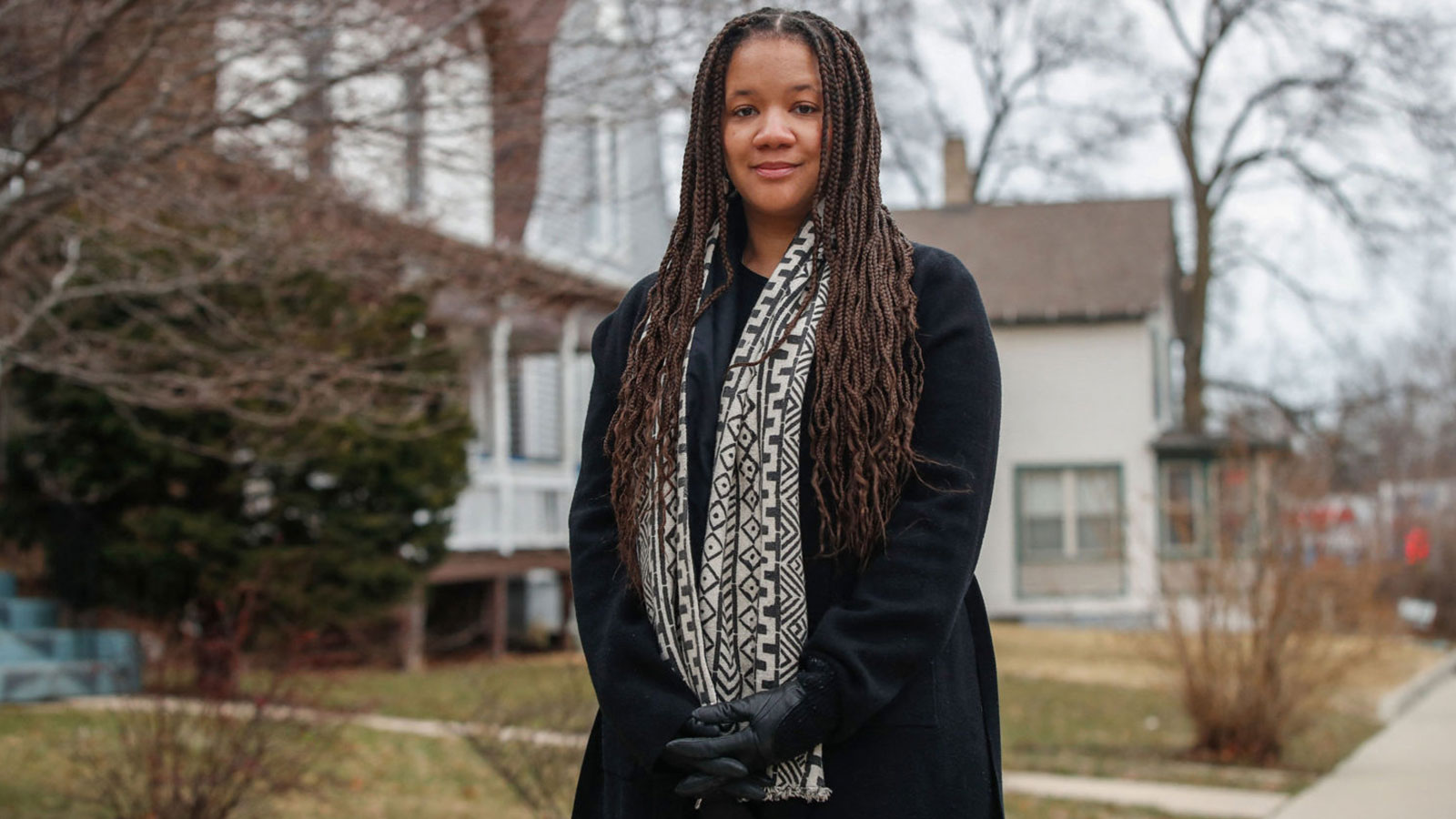 Evanston has 12,000 Black residents, but no estimates have been calculated for how many of them potentially qualify to receive the housing grant or what meeting the full need would cost. “I don’t see how you can repair something if you don’t really know what it is that you have to repair,” says Lesley Williams, a Black Evanston resident who opposed the housing grant proposal. “If you tried to really assess the value of what was taken out of the African American community just during redlining, it would be in the hundreds of millions.”

Williams’s father experienced the housing discrimination in Evanston first-hand when he was a student at Northwestern University several decades ago, but Williams is still unsure if she is eligible for the housing grants and has no plans to apply.

“Like all Black Northwestern students, he was banned from living in the dormitories, so he had to live in the Fifth Ward. They basically just told Black students, ‘Well, just find a nice Black family to stay with,’” said Williams. “There’s no kind of system on prioritizing older residents so they can actually see some form of justice while they’re still alive or prioritizing people by the amount of time they lived in Evanston.

“Residents also question whether the money should go directly into the hands of those who perpetuated the racial discrimination in the first place.

The city hopes to address the concerns by providing a resource guide for grant recipients that includes a list of Black banks; banks with a history of fair lending; and a directory of Black contractors, realtors, real estate attorneys, appraisers, surveyors that grant recipients can hire.

“Those that use their benefit to improve their home would pass on $25,000 of earned revenue for Black businesses that complete the improvement,” says Simmons, who is widely credited for turning the possibility of reparations into a reality.

Simmons explained that the housing proposal was chosen for its support among people who attended subcommittee and town council meetings. She said there were at least a dozen meetings in 2020, and only two residents of the 100 present showed overwhelming support for cash payments.

Other ideas proposed by residents included free college tuition at the prestigious Northwestern University, opening a school in Evanston’s historically Black Fifth Ward, creating a Black history museum, tax abatement, business grants and Black business incubators. Simmons explains that the final program’s shape was determined, “based on the participation that happened over the last two years of the thoughtful residents and leaders that cared enough to participate”.

But city residents say that the city council and commission meetings were not always accessible. “Those meetings were at 9am on a weekday, usually Tuesday or Thursday. For Black residents, the chance that you can attend a 9am meeting while simultaneously having a job, taking care of your family, is very small,” said Nalls. “And people did go to these meetings to speak in opposition, their voices were ignored during this whole process.”

“You can’t really tell how many Black residents supported this plan because there wasn’t a vote on it or anything. There were people calling for a referendum to see how people actually felt about it, but that never happened,” said Williams. “Unfortunately, most of the white people who spoke were in favor of the plan came off as being very entitled and very arrogant, essentially telling Black people, ‘You really should take this now because we don’t know whether we’ll ever be able to do anything else.’”

Meanwhile, the future of the program is uncertain.

Currently, the program is planned to be funded from tax proceeds from cannabis sales. “This is powerful because people understand the ‘war on drugs’ targeted Black people disproportionately all across the board, it is well documented. So what more poetic justice than to have the revenue to support a repair that comes from the legalization of marijuana,” says Dr. Ron Daniels, President of the Institute of the Black World 21st Century (IBW, IBW21) and the convener of the National African Americans Reparations Commission (NAARC).

But city residents worry that the $10m committed to reparations may not eventually be made available if the city doesn’t raise enough money from the cannabis tax.

“If we’re really treating this as an ethical obligation, we should treat this the way we treat our other obligations. For example, we have a pension obligation, and we don’t say, ‘Depending on how many people buy weed this year we may or may not fund the pension.’ We levy a certain amount of money every year, and also we know what the goal is that we need to get to,” says Williams.

Nalls also pointed to the lack of any educational programming for all city residents on the history of racial discrimination in Evanston as another shortcoming. “That’s probably one of the most integral parts,” explained Nalls. “You need to spend a period of time educating your municipality or your nation on why we’re doing this reparations program, what policies historically were in effect that were negatively impacting Black people.” 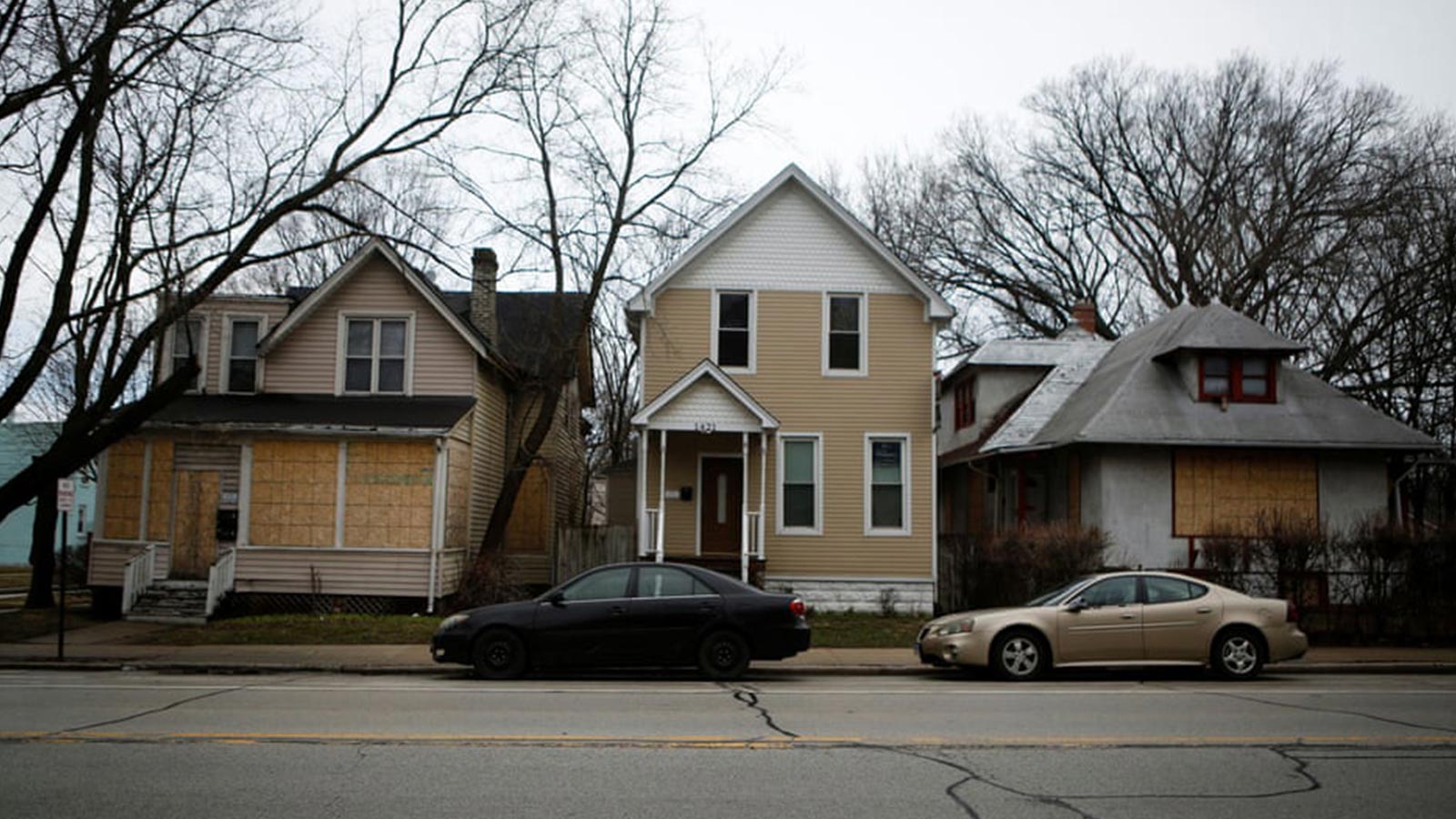 This lack of effective education has been central in stymying national support for reparations – a recent poll from the University of Massachusetts Amherst finds that nearly two-thirds of Americans and 90% of Republicans oppose cash payments for descendants of enslaved African Americans.

That hasn’t stopped national conservative organizations like the Project on Fair Representation and Judicial Watch from targeting Evanston with racial discrimination lawsuit threats. The latter, claiming to be concerned that the allocation of money on the basis of race violates the constitution’s guarantee of equal protection under the law, has accused the city of Evanston of hiding public documents justifying their decision to implement a race-based reparations plan.

There are still opportunities for Evanston residents to shape the trajectory of the housing program, as well as to determine how the rest of the $9.6m of that $10m allocated to the 10-year reparations plan is spent. In March, after the housing proposal passed through the city council, the city of Evanston opened up applications to serve on the city’s reparations committee. The committee will be composed of three aldermen and four community members appointed by the mayor.

This is a beginning, and it should be seen as such — Dr. Ron Daniels

“This is a beginning, and it should be seen as such,” said Daniels. “The trillions of dollars that are required to really meet the needs of these communities can only be met through revenue from the federal government. And quite frankly, with the whole world looking at Evanston as the very first example of reparations being awarded in the United States, it actually makes the case and boosts the effort and momentum for the federal legislation.”

But Evanston residents are not so sure that the program will help the national cause.

“There are plenty of municipalities that would love to take advantage of this program to say that they gave $25,000 to 10 to 15 Black people in their municipality of 10,000 to 15,000 Black people and can call it a day, we did what we needed to do. But that’s not the case,” said Nalls.

“Reparations is a continual effort of education, repairing the damage done and then restoring the community to the place that they were before the damage was done in the first place.”

Source: The Guardian
Featured Image: A mural is seen in the Fifth Ward in Evanston, Illinois. (Photograph: Eileen Meslar, Reuters)