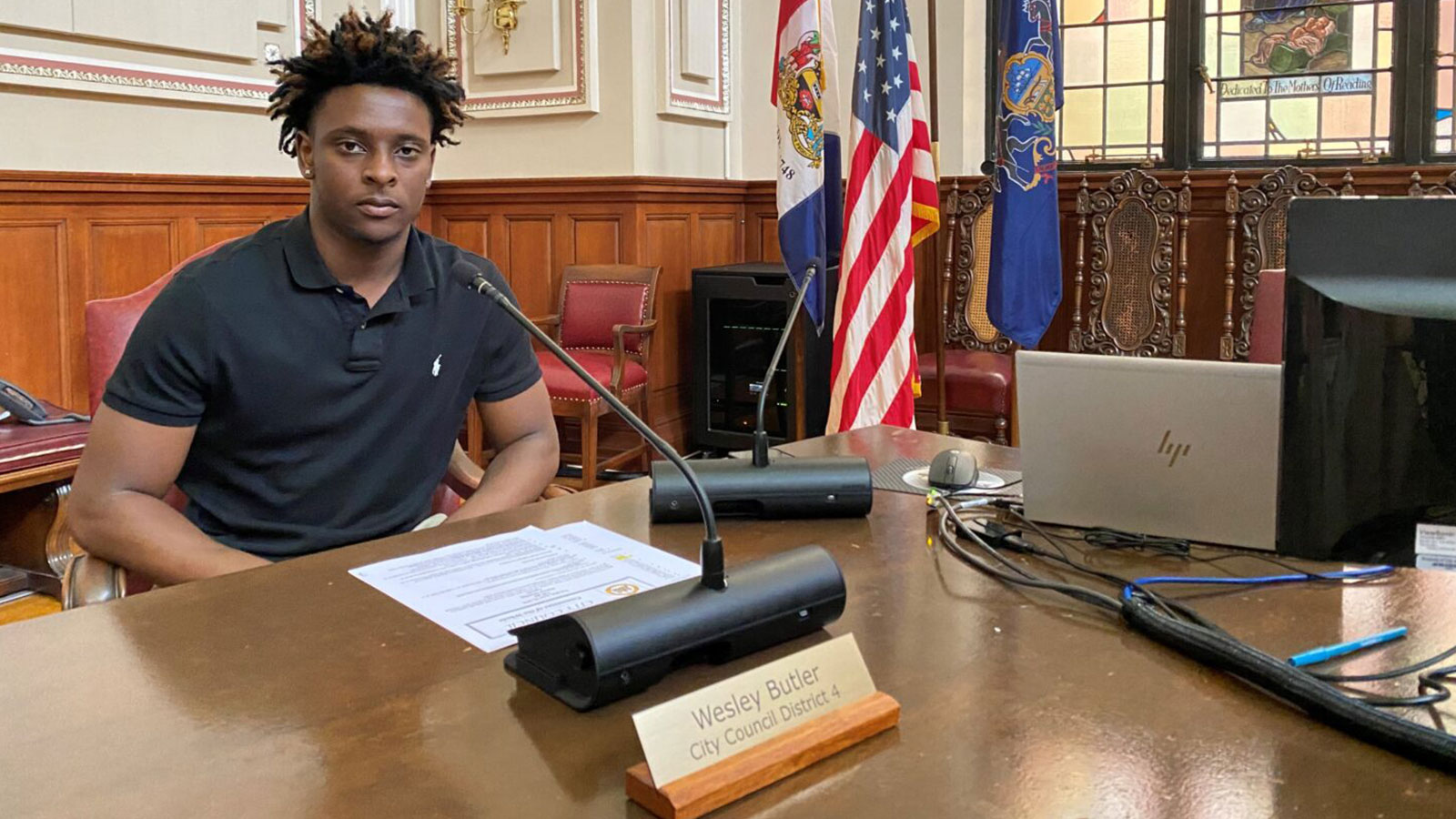 A councilman in Reading, Pennsylvania wants the city to implement reparations for slavery

Reading City Councilman Wesley Butler says he is drafting an ordinance on municipal reparations for Black residents in Reading.

Randy Johnson sat in front of mirrors as his barber applied shaving cream to his neck.

“I want to tell you something about giving money for oppression,” Johnson said. “You can’t give any kind of money on slaves, blood bleeding into the dirt.”

On a Thursday afternoon, the guys at Danny Moore’s Barber Shop in Reading were debating aspects of reparations for slavery.

Waiting on his trim, 69-year-old “Sonny” Daniel Williamson, chimed in.

“Look at what they’re giving to Ukraine,” Williamson said, referring to the more than $54 billion dollars the federal government has committed in economic and military aid to combat the Russian invasion. “What’s the appropriate amount? Look at all the billions they’re giving away.”

witf · One councilman’s effort for reparations

The walls around Johnson, Williamson and Moore are covered floor to ceiling with photos of civil rights icons, business cards and quotes from titans of the Black community — many, if not all, descendants of enslaved people.

The conversation in the barbershop that day wasn’t about sports or weekend plans, it was about doing something locally to confront the wrongs of the past. A recent proposal from a Reading City Council member had the barbers and customers talking; some debating, some agreeing.

Days earlier, at an event hosted by the city government to honor Juneteenth, City Councilman Wesley Butler made a proposal and a challenge.

He urged Reading’s elected officials to use American Rescue Plan Act money to fund cash payments to the city residents who are descendants of enslaved Africans.

“I’m calling on Mayor [Eddie] Moran and my fellow councilmen to allocate funding for these reparations,” Butler said to applause in front of City Hall. “Payments are not the only option for reparations, free access and open enrollment to the public and community colleges and universities, educational support programs ….”

Let’s be on the right side of history 💯 pic.twitter.com/arwsfPnXBD

At the age of 21, Butler was the youngest person to ever serve on city council. He is still in college, studying communications at Kutztown University.

He is also the only Black member on council after Brianna Tyson, who was also elected the same year as Butler, resigned in March.

Butler is writing a draft ordinance for his city-wide reparations proposal. He says having a voice on the decision making body carries a lot of weight for him.

“When you’re black, and you make it to a high place, you just feel a responsibility to give back to your community,” Butler said.

Non-Latino Black people make up about 11% of the city that has been majority Latino for over a decade.

“I’m gonna look out for the whole city but when it comes to an issue that I can help from our community, it just means so much more when you feel as though you can help them advance,” he added.

Butler is looking to a number of other cities across the country that are making pledges or already implementing reparation programs.

Efforts across the nation

Dr. Mary Frances Berry is a professor at University of Pennsylvania who specializes in constitutional, legal and African American history.

Berry has written a book about formerly enslaved people petitioning for reparations in early reconstruction, and she testified for the reparations task force for the state of California. That group’s preliminary report suggests raising the state wage, providing health benefits to black employees in the state and tuition paid for higher education institutions.

Berry notes that nearly a dozen mayors in cities across the country have pledged to pilot reparations programs in their cities.

Providence, Rhode Island, is exploring how it can use $10 million from ARPA in the Black community as a means of reparations.

Leaders in St. Paul, Minnesota, are mulling over using ARPA money to narrow the wealth gap between the Black and White communities.

Butler, who also serves on the city’s ARPA grant review board, says he wants to do the same.

Evanston, Illinois, became the first municipality in the nation to implement reparations through a home improvement program funded by taxation on cannabis sales.

Robin Rue Simmons is the former Evanston City Council member who spearheaded Evanston’s reparations program. She heads FirstRepair, an organization that helps municipalities learn more about how they can also implement reparations on the local level.

Simmons said she encourages Butler to look at repairs the city can directly address and fund.

“My strong position on local leaders initiating reparations and crafting legislation is, one; that they do it within their purview,” Simmons said. “Education comes up (as a suggestion for reparations) in every community, that’s an opportunity for the local leader to engage the school system, school districts, universities, colleges and community colleges that are in town, for them to commit to reparations and for them to implement remedy.”

Evanston used tax dollars from cannabis sales to fund a home repair program for black residents who lived in the city from 1919 to 1969 or are descendants of someone who did.

It directly addressed racist housing practices in Evanston during that time period.

So far, it has funded home repairs of 16 Black households, each getting $25,000 in funding.

Simmons says that for meaningful and impactful reparations, cities should research how Black people were historically marginalized and also survey what people want.

“A first step to reparations in any community is to engage the black community, for what repair looks like to that black community,” Simmons said. “It is for the harmed community to inform the repair and the remedy.”

What the community is saying

In Danny Moore’s Barber Shop, people offered suggestions that — unbeknownst to them — mirror proposed reparations programs in other cities.

“Now, we all know we don’t have black businesses in the city of Reading,” Moore said. “It seems like it’s hard for them to get started in business. It’s not the college education — we need money to open garages, grocery stores, laundromats, you know what I mean?”

Some of the guys in the barber shop — like many in the Black community —are familiar with Butler’s family, and some express pride in their accomplishments.

His mother, Tonya Butler, is a magisterial judge; his father, Wynton Butler, is the director of social services for the Reading School District; his brother Wynton Butler II served on the city’s youth council before recently aging out; and his grandfather Jimmy Butler was a well known police officer in the Reading Police Department.

A few blocks away from the buzz of Moore’s shop, John Beckett wrote down food orders over the phone. He’s served soul food out of his downtown restaurant, Beckett’s, for more than 30 years.

Upon hearing Butler’s pitch, Beckett had a mix of optimism and doubt.

“I like that, I think that’s a good idea, especially if it came from Wesley’s mouth,” Beckett said about the free college tuition, though he was skeptical about the mechanics of getting direct payments to people. “I don’t know about the money part, though.” 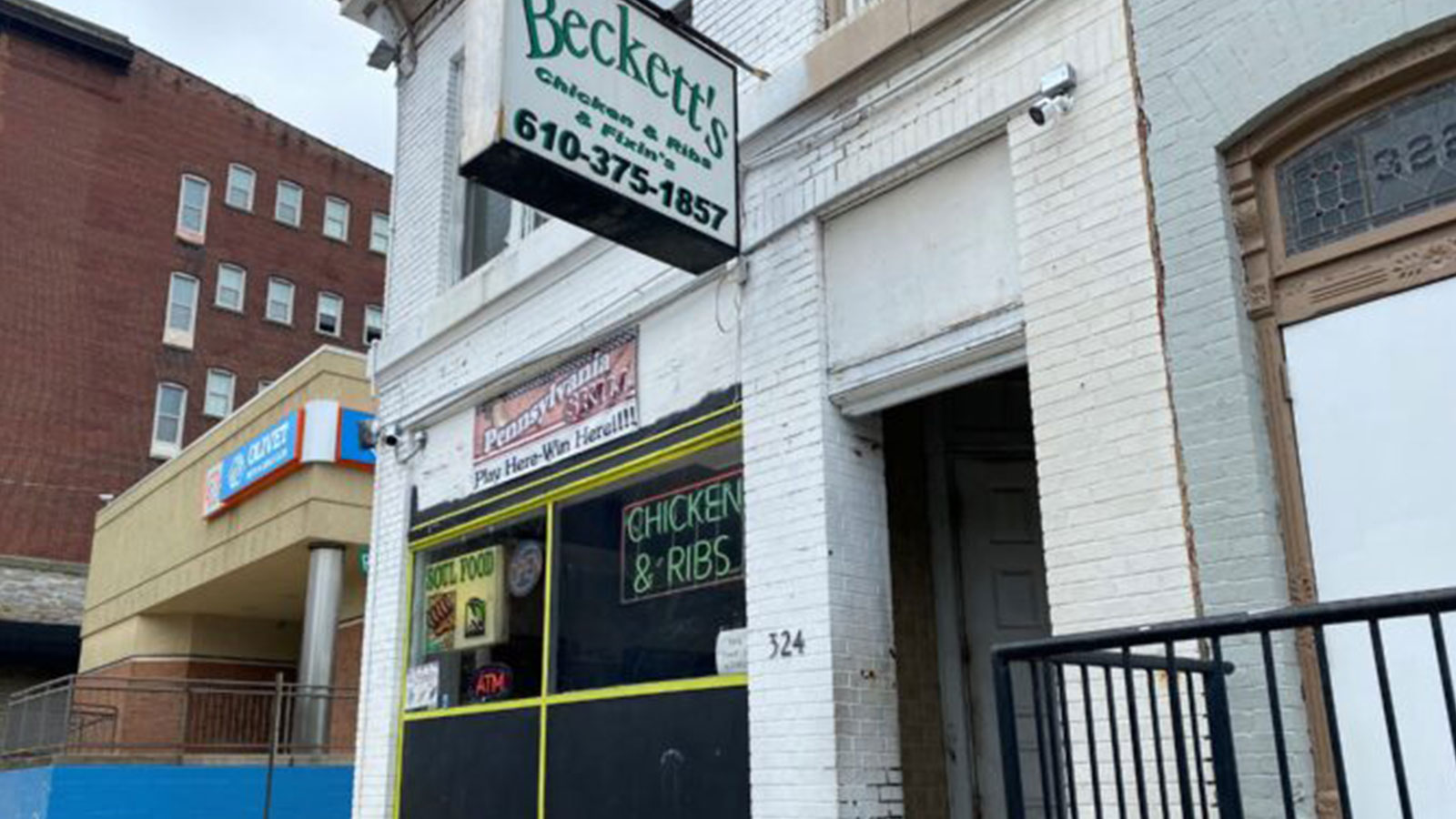 Butler noted that Alvernia is asking for millions of dollars in city support to expand their downtown presence.

Albright leadership says that the school doesn’t offer financial assistance specifically on race, but the school has implemented internal diversity and inclusion initiatives, funding opportunities for students and expanded courses in Africana studies.

But they did not comment on the possibility of working toward Butler’s goals. 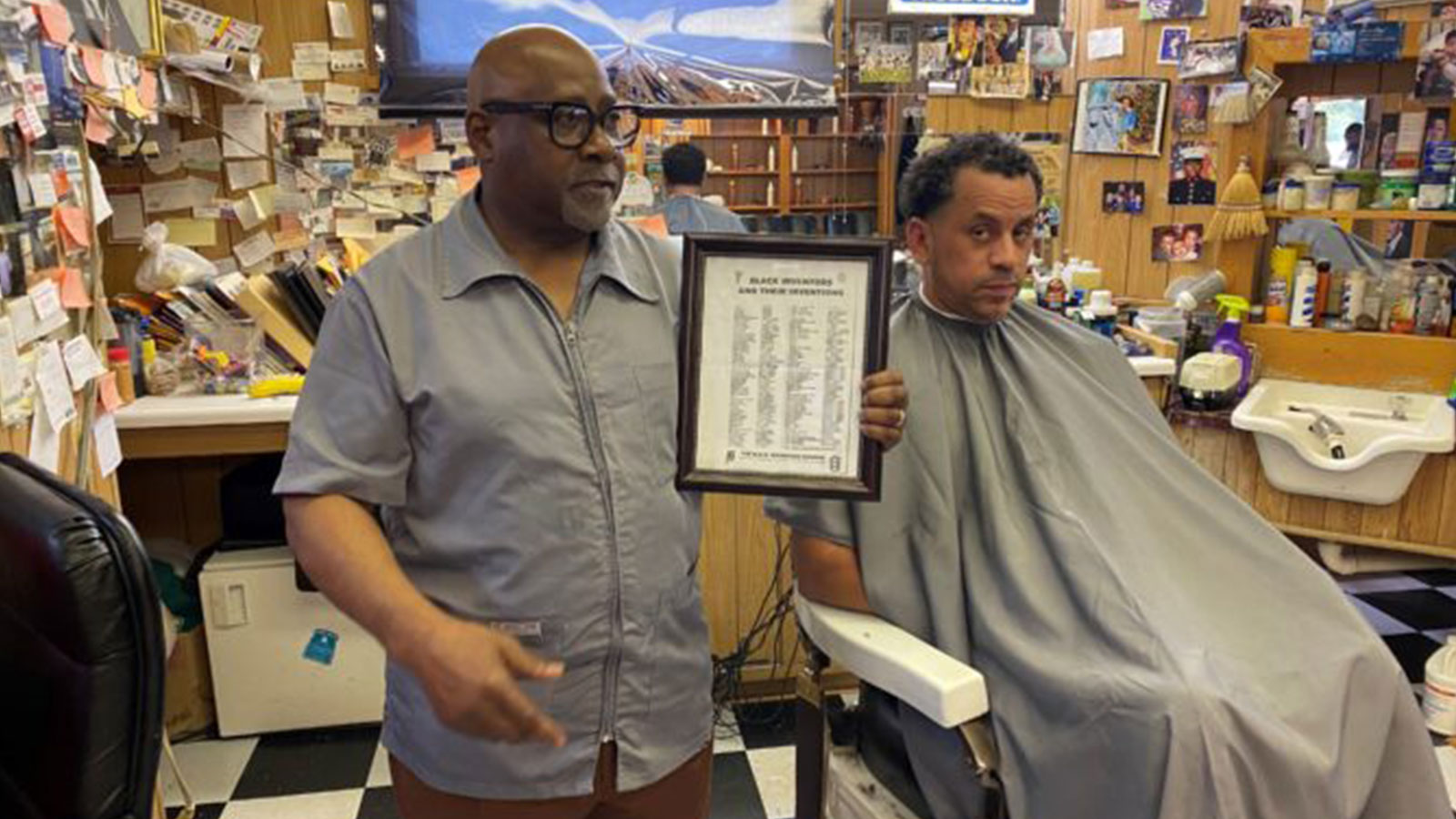 Danny Moore holds up a list of Black inventors and their inventions (Anthony Orozco / WITF).

Many of the people who are heartened by Butler’s efforts also shared resolve in that the enslaving of their ancestors cannot ever really be repaired.

Danny stopped cutting a client’s hair for a moment and held up a framed list of historic Black inventors.

“No matter what you give, you cannot…you cannot put a price on this, on all the contributions we made to this country,” Moore said.

Anthony Orozco are a part of the “Report for America” program — a national service effort that places journalists in newsrooms across the country to report on under-covered topics and communities.