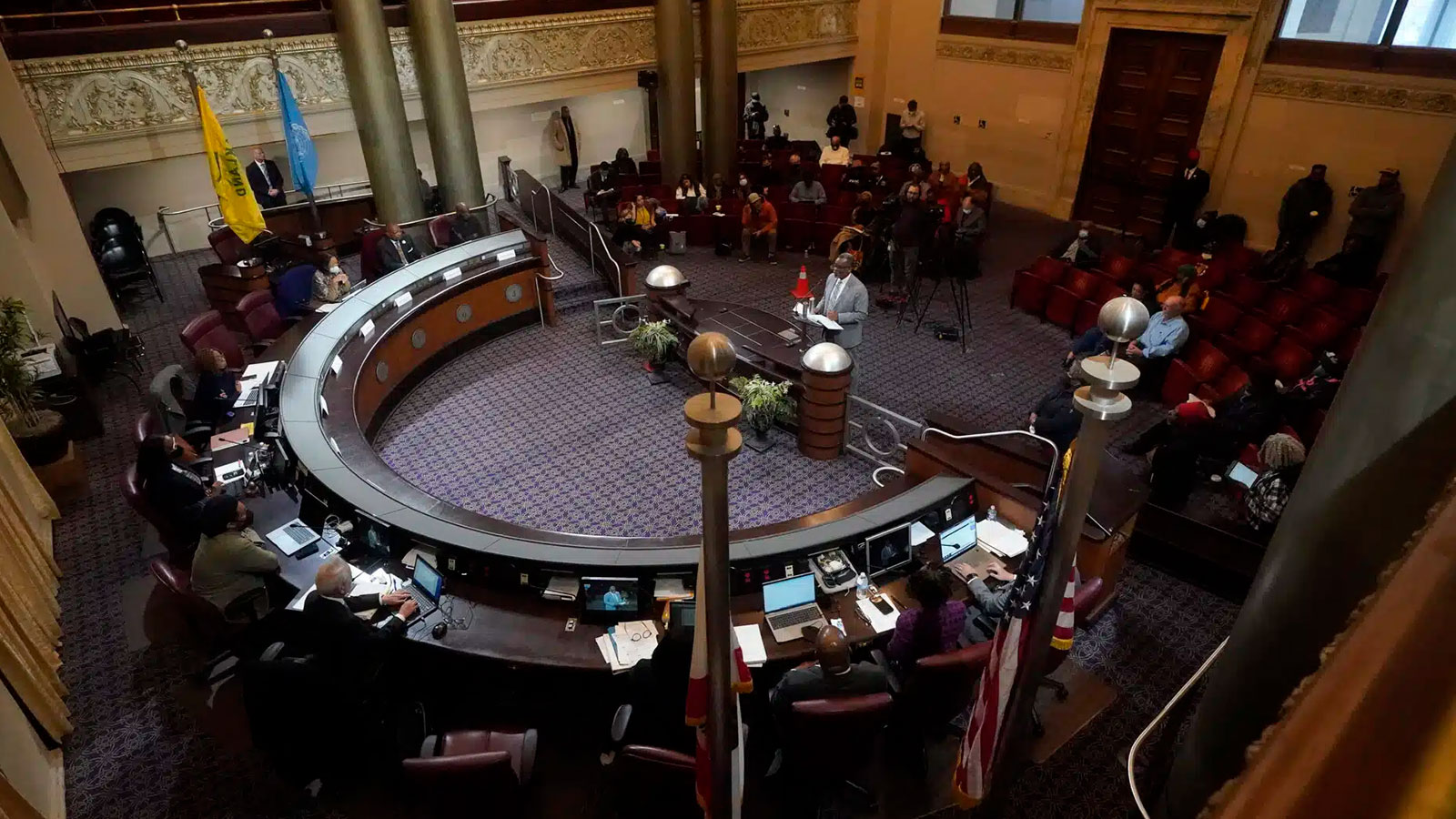 Daily Mail takes a look at the reparations debate, and finds out whether small-scale efforts in liberal enclaves could ever amount to a national effort to tackle racism’s legacy once and for all.

Plans to compensate black Americans for slavery-era sins have been around for decades. They’ve gained traction in recent months as ever more left-leaning states and cities launch local inquiries into their own atonement schemes.

San Francisco made headlines this week with a proposal for $5 million payouts to every longtime black resident, and other plans to address generations of economic losses suffered by the minority group.

The announcement provoked uproar, with many observers balking at the eye-watering sum and immediately asking what the scheme would cost in its entirety, who foots the bill, and whether it would hurt California‘s economy.

Meanwhile, the Illinois city of Evanston has been helping residents who suffered from long-forgotten racist housing policies. Its grants have paid off a few mortgages, but also stoked divisions between winners and losers.

Against this backdrop, DailyMail.com takes a look at the reparations debate, and finds out whether small-scale efforts in liberal enclaves could ever amount to a national bid to tackle racism’s legacy once and for all. 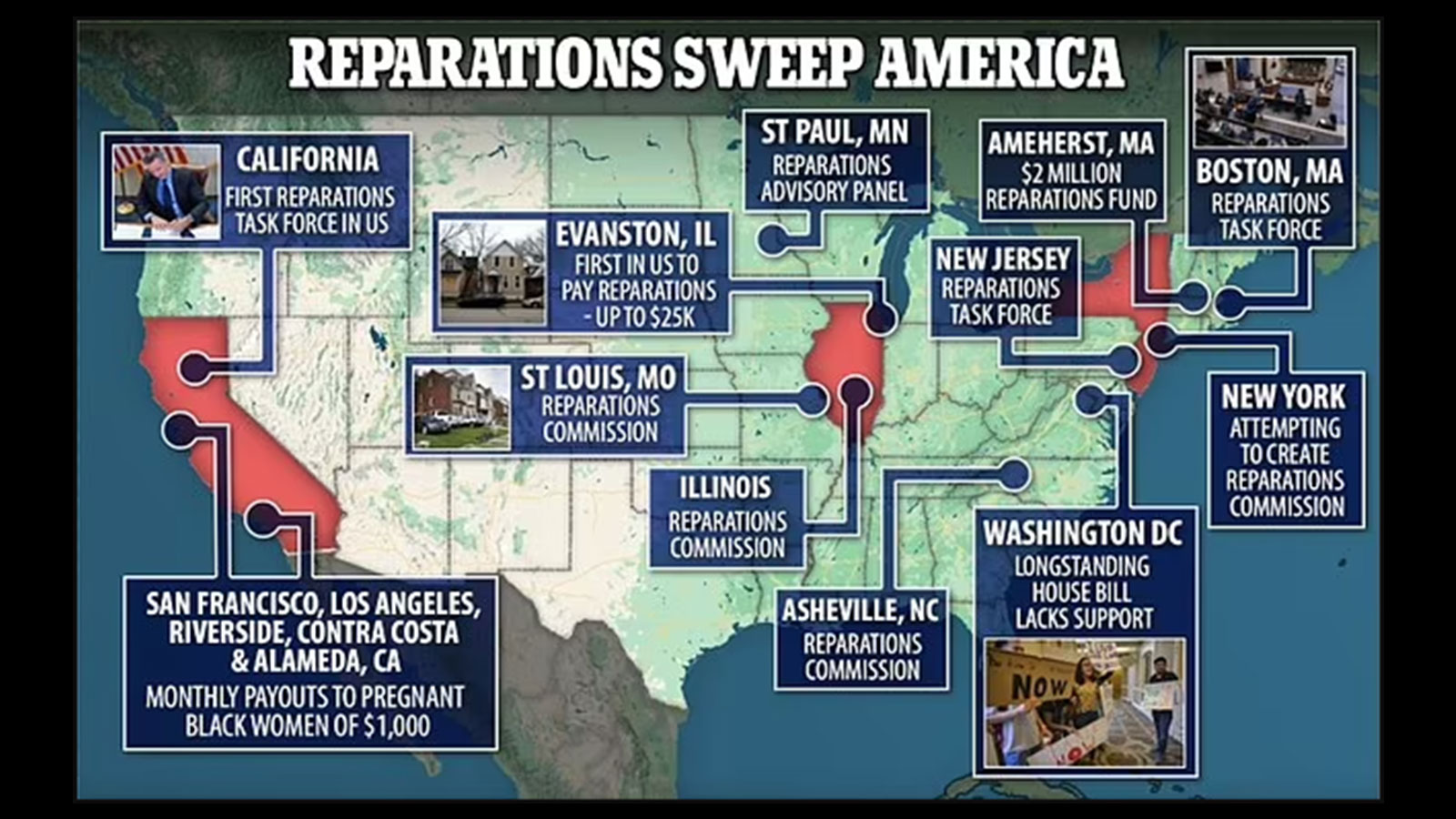 From California to Massachusetts, newly-formed panels are grappling with what a reparations scheme should look like

Why are reparations so controversial?

Advocates of reparations say it’s time for America to repay its black residents for the injustices of the historic Transatlantic slave trade, Jim Crow segregation and inequalities that persist to this day.

From there, it gets tricky.

There is no agreed framework for what a scheme would look like. Ideas range from cash payouts to scholarships, land giveaways, money for special banks and investment funds, bespoke grants for housing, or just statues and street names.

Cities including Boston, Massachusetts, St Paul, Minnesota, and St Louis, Missouri, as well as the California cities, San Francisco and Los Angeles, have set up task forces and panels to hatch their own reparations plans.

Much of the focus is on California, where a state-wide task force has until July 1 to issue a final report of its recommendations for how it can atone for and address its legacy of discriminatory policies against black people.

All panels face the same conundrum — how to fairly calculate the losses that black people have incurred over the centuries, and what might be required to prove eligibility for any payout.

The California panel is focused on five harms: property stolen by the government, the devaluation of black-owned businesses, housing discrimination and homelessness, mass incarceration and over-policing, and health.

San Francisco’s own city reparations panel has proposed a one-time lump sum payment of $5 million to each eligible black person, and debt forgiveness, to correct decades of ‘systematic oppression’ there.

Video: Black attorneys slammed San Francisco’s proposal to provide every black resident with $5 million as racist in an interview on Hannity Monday night.

Leo Terrell, a civil rights lawyer and Fox News pundit, called the plan ‘outrageous, unconstitutional and unlawful’ and even racist on the network on Monday night — and vowed to fight it.

America had largely turned the page on racism, added Terrell, but Democrats were encouraging people to play the ‘race card’ and seek unwarranted reparations in a bid to win black votes.

Terrell and Elder, who are both black, demanded to know who is going to fund the large payout — estimated to cost the city at least $50 billion — noting that California was never a slave state.

Justin Phillips, a San Francisco Chronicle columnist, however, argues that the city’s politicians should move the plan forward to show they’re ‘serious about confronting the city’s checkered past.’

‘Segregation, systemic oppression and racial prejudice born from the institution of slavery had a profound impact on the city’s evolution,’ Phillips said.

How do reparations work in practice?

The US government has in the past compensated people of Japanese descent who were incarcerated during World War II and American Indian tribes for lost lands, but there have so far been no large-scale reparation schemes for African Americans.

The city of Evanston, Illinois, has gone further than most, making grants available to those affected by racist housing policies before 1969 to buy their own home, repay a mortgage or carry out repairs.

The lakefront city of 78,000 people in 2019 set aside $10 million from new cannabis tax revenues to create a $25,000 housing voucher program aimed at helping 400 of its thousands of black residents.

The unusual experiment in the university town north of Chicago is eyed for any success or controversies. Organizers say the scheme doesn’t correct for slavery, but rather specific racist housing policies in the last century.

To apply, black residents must show that they or their forebears lived in Evanston between 1919 and 1969, when the city implemented racist policies, such as contract loans, which made it harder for black people to get on the property ladder.

So far, only 16 applicants have received payouts and hundreds more are on waiting lists or in limbo. The scheme has stoked divisions between recipients and those left without. Some applicants have even died before getting a payout.

One of the most common gripes is that renters, as opposed to homeowners, don’t get a look in.

Others note that reparations schemes are unfair on poor non-black households, which can end up footing part of the bill even though they didn’t do anything wrong.

For many, reparations for black people will inevitably prove divisive, stirring anger between beneficiaries and losers, and raise questions about why other marginalized groups like American Indians don’t merit their own payouts. 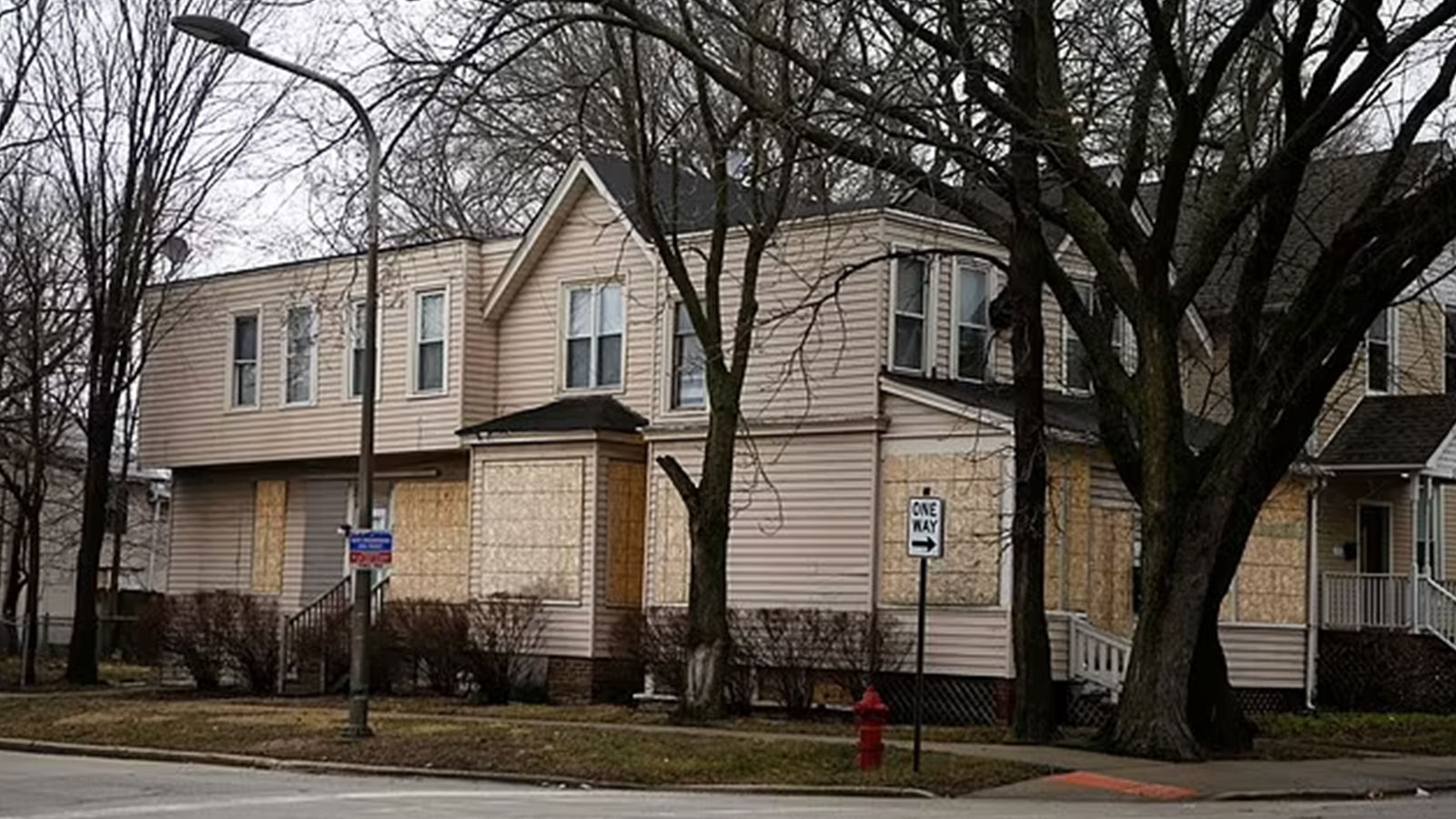 Boarded up houses are seen in the Fifth Ward in Evanston, Illinois, the poorest part of the city and a center for the black community (Reuters) 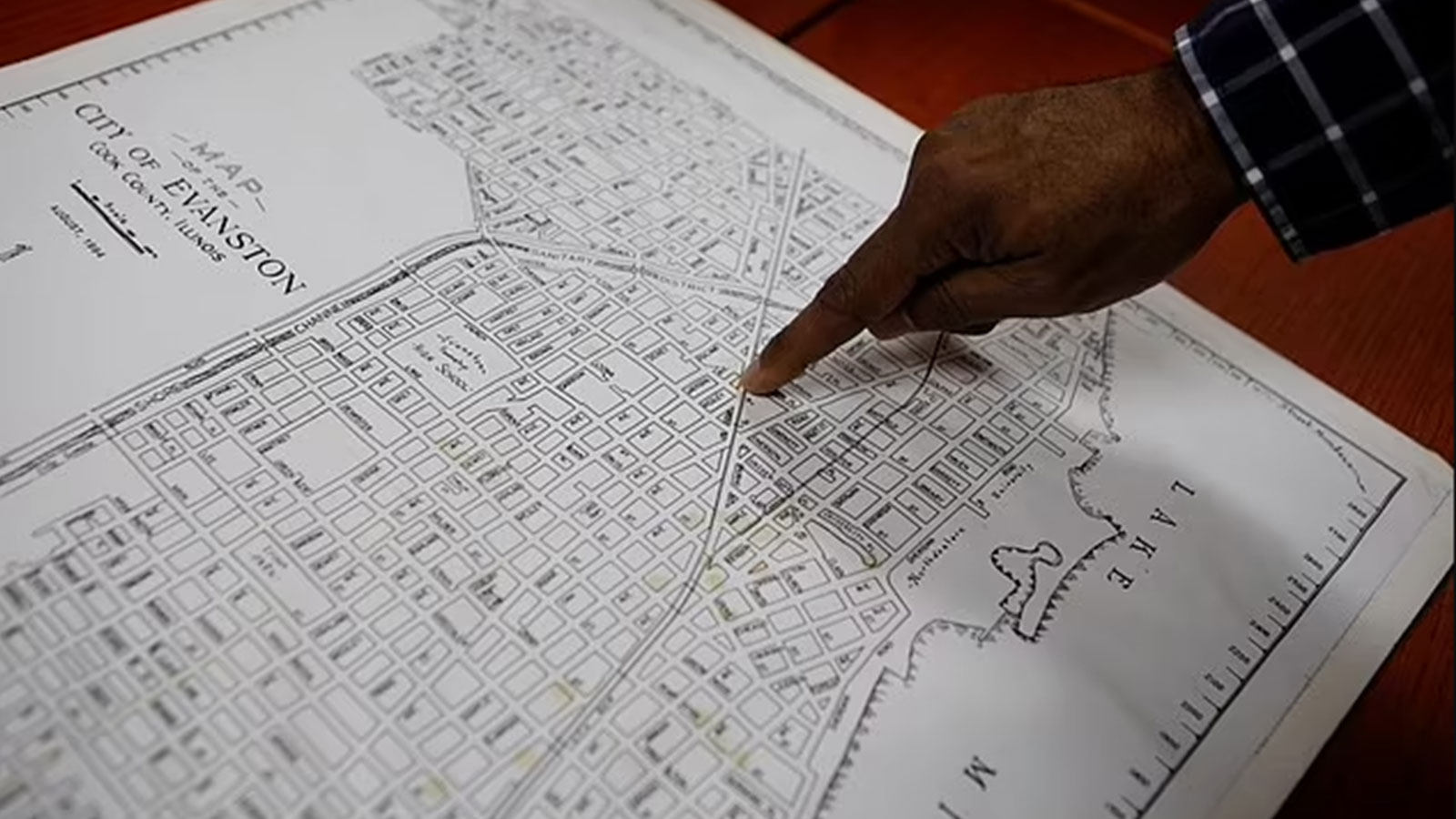 Community historian Morris ‘Dino’ Robinson, points to the borders of the Fifth Ward, which was the area of Evanston the city’s Black citizens were forced to move to due to redlining between 1919 and 1969 (Reuters)

Do we need reparations?

The inequalities between blacks, whites and other groups in America are real. A Brookings Institution report says white families have roughly 10 times the amount of wealth as black families, on average.

Black people are also incarcerated at five times the rate of whites, according to a report from The Sentencing Project.

The controversial panel in San Francisco focused on such disparities.

The lump sum is designed to ‘compensate the affected population for the decades of harms that they have experienced’ and redress their economic and opportunity losses, its report says.

As well as the lump sum, poor black San Franciscans would get 250 years of income adjustments and tax credits, while benefiting from new investment vehicles and black-owned banks.

Critics say America has already moved beyond the need for reparations, that society is fairer nowadays, and inequalities persist because liberal social welfare programs perpetuate a culture of victimhood.

Ben Shapiro, a right-wing commentator, said decades of anti-poverty spending to the tune of $25 trillion had done nothing to ‘fix the wealth gap’ between blacks and whites.

Shapiro criticized the ‘evil of forcing those who did not sin to pay those who have not been sinned against.’

Six in ten respondents opposed payouts to the descendants of slaves, while four in ten said the federal government should ‘definitely should not pursue’ such a policy

What does the public say about reparations?

Residents in liberal areas have backed local reparations efforts, but they are unpopular nationally.

A University of Massachusetts Amherst Poll this month found that six in ten opposed payouts to the descendants of slaves, while four in ten said the federal government should ‘definitely should not pursue’ such a policy.

That may be changing — a majority of young adults support reparations schemes.

Tatishe Nteta, the professor who led the poll, said Americans were ‘still reluctant to financially atone for the nation’s original sin’ and said ‘race still divides the country.’

A Pew Research Center survey in 2021 found that 77 percent of black people supported payouts to the descendants of slaves, against 18 percent of white people. 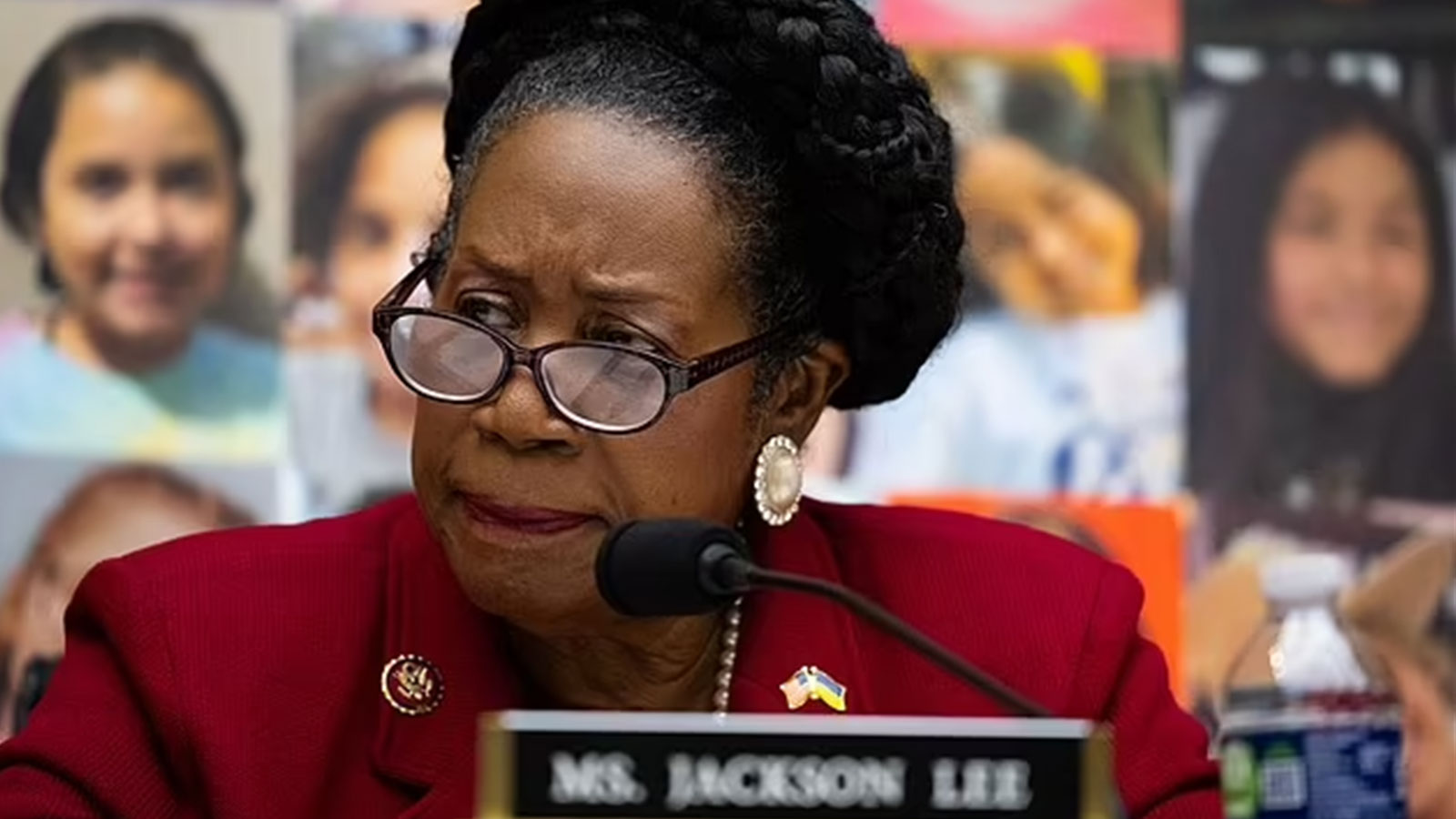 Democrat Representative from Texas Sheila Jackson Lee has for long been one of the staunchest supporters of reparations schemes in Washington, DC (EPA)

Not much. Texas Democrat Sheila Jackson Lee is pushing HR40, the reparations bill first introduced 30 years ago, but the Republican-led House of Representatives has shown little appetite for it this session.

President Joe Biden has voiced support for a federal study into reparations. But, presumably aware of the polling, appears loath to answer calls from Lee and others to use his executive powers to launch a probe himself.

Biden made no mention of reparations on Monday, an observance day for the civil rights campaigner Martin Luther King. He only mentions reparations when speaking of Russia’s debt to Ukraine for damage wrought in the nearly year-old war.

With broad public opposition, reparations is a non-starter for most national politicians.