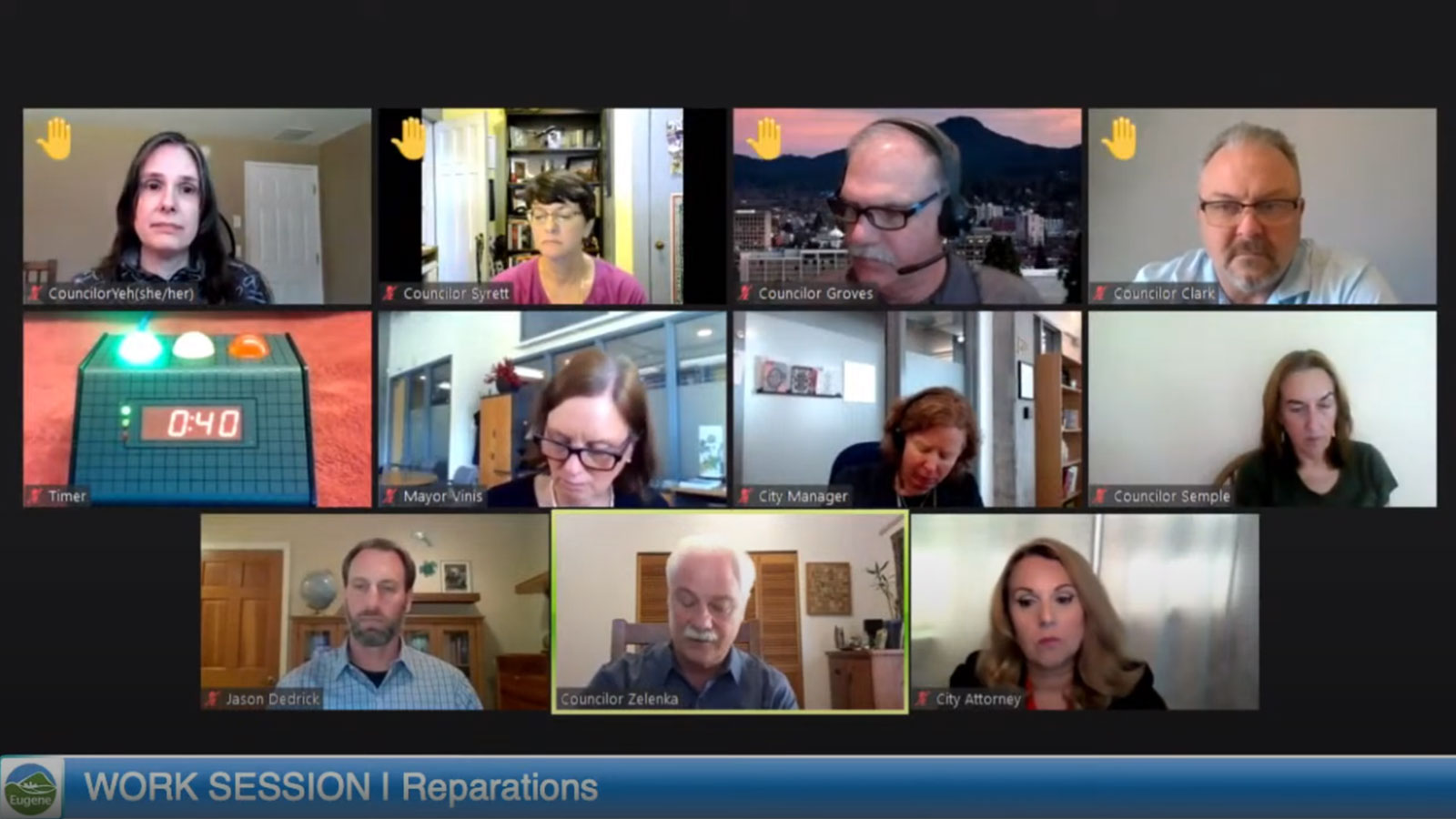 Eugene city councilors looked at reparations efforts in other cities across the country and discussed possibilities in Eugene.

One year after Black Lives Matter protests swept the country, the city of Eugene is beginning discussions about reparations — or making amends by paying or otherwise supporting people who have been harmed, often by systemic discrimination.

Councilor Greg Evans, who put the issue forward to the City Council, said he did so following national conversations about reparation efforts.

The council held its first discussion about reparations at its June 23 work session.

Evans is the only Black Eugene city councilor. Pointing to Eugene’s history of excluding Black people from owning homes within the city limits, he said “the idea was to — legally, physically and everything else — keep us out of the community.”

Jason Dedrick, a policy analyst for the Eugene City Manager’s Office, said the presentation was intended to provide councilors with “a place to start from” in conversations about reparations.

“What we’re finding through our work is that the more tailored an approach is to the local context and the history of the community and where the community conversation is, the better chance there is for success,” he said.

Dedrick highlighted reparations efforts in five cities across the country as potential frameworks for Eugene to draw on. These included Evanston, Illinois, whose reparation efforts focus largely on housing, and Providence, Rhode Island, which is taking a three-step approach to reparations on a statewide scale.

In the following discussion, Councilors Randy Groves, Emily Semple, Claire Syrett, Jennifer Yehand and Alan Zelenka said they supported models similar to Providence — which focuses on a truthful retelling of history, reconciliation via community conversations and reparations based on those earlier steps.

Syrett said she wants to look at reparations for various BIPOC communities who have been targeted in Eugene, with the acknowledgement that Black people have different experiences from Native American individuals or immigrant communities. In doing that, Yeh said she wants to hear from BIPOC Eugeneans and advocate for the reparations that they would like to see.

Although Councilor Mike Clark initially proposed a plan to focus on housing loans, he said he agreed with the rest of the council’s general consensus. “The reason that I spoke and used my first round to talk about a specific idea I had was to illustrate my seriousness for this,” Clark said, “and how important it is to me that we do something meaningful for people locally and that I’ve been thinking about this for quite a while.”

The council alluded to further meetings about reparations, although they did not set a specific date for future conversations. Councilors did not discuss the financial impacts of reparations measures.