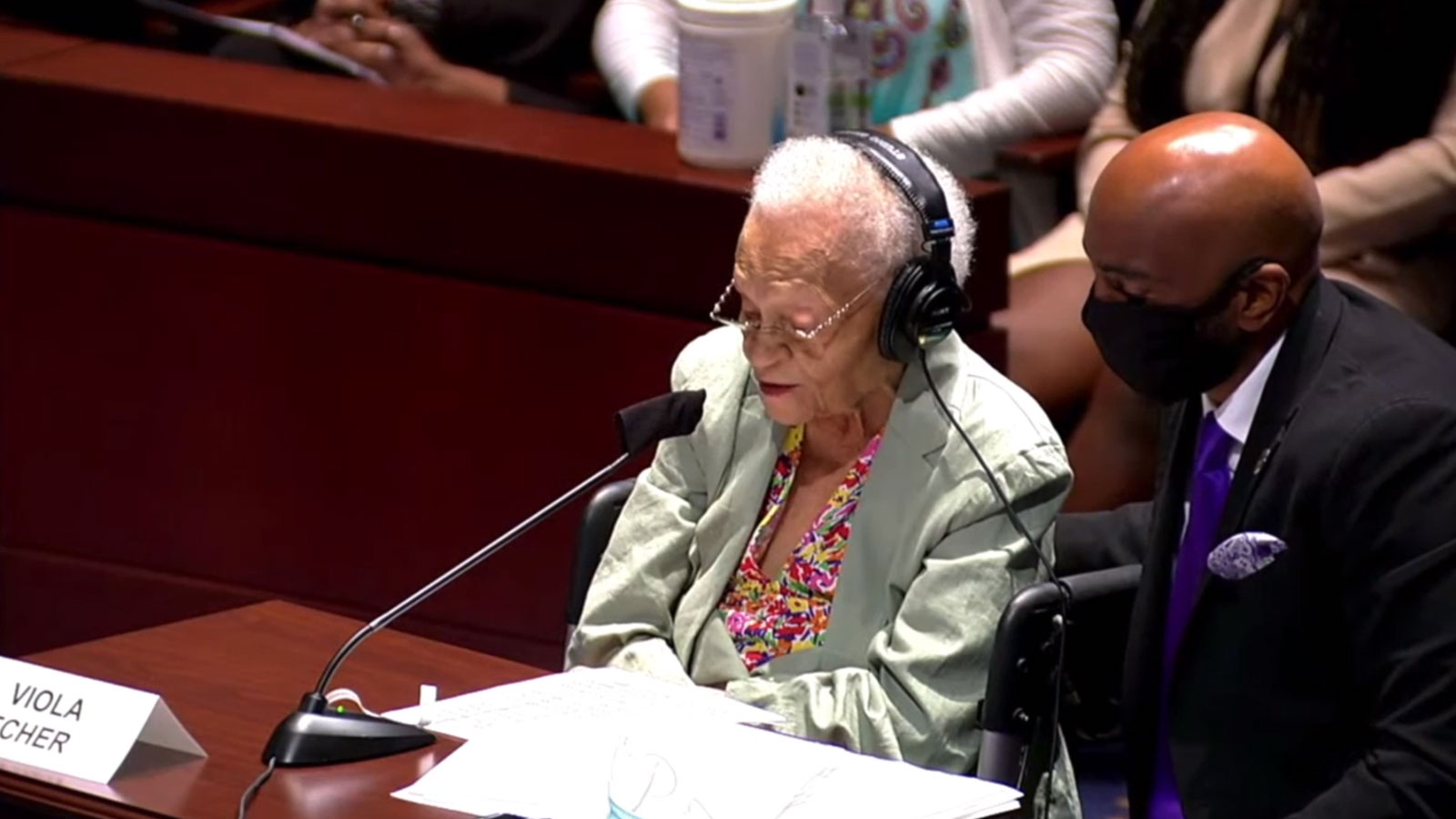 In pursuit of reparations, Tulsa Race Massacre survivors ask city to ‘do the right thing’

Editor’s note: The following may include first-person accounts of the 1921 Tulsa Race Massacre contain graphic depictions and antiquated racial terminology. We have chosen not to edit these survivor accounts to leave their stories unencumbered by interpretation or exclusion.

Across the United States, renewed calls for reparations to help right decades-old racial injustices have been part of a racial reckoning that seemed to gain momentum in the wake of the killing of George Floyd.

As the centennial of the 1921 Tulsa Race Massacre is commemorated and survivors of the tragedy are honored, a demand for justice in the form of reparations will continue to be part of the conversation.

Damario Solomon-Simmons, lead attorney for a landmark reparations lawsuit against the city of Tulsa and other entities, said the case for reparations has successfully been made in other situations across the country, and reparations for massacre survivors and their descendants are long overdue. 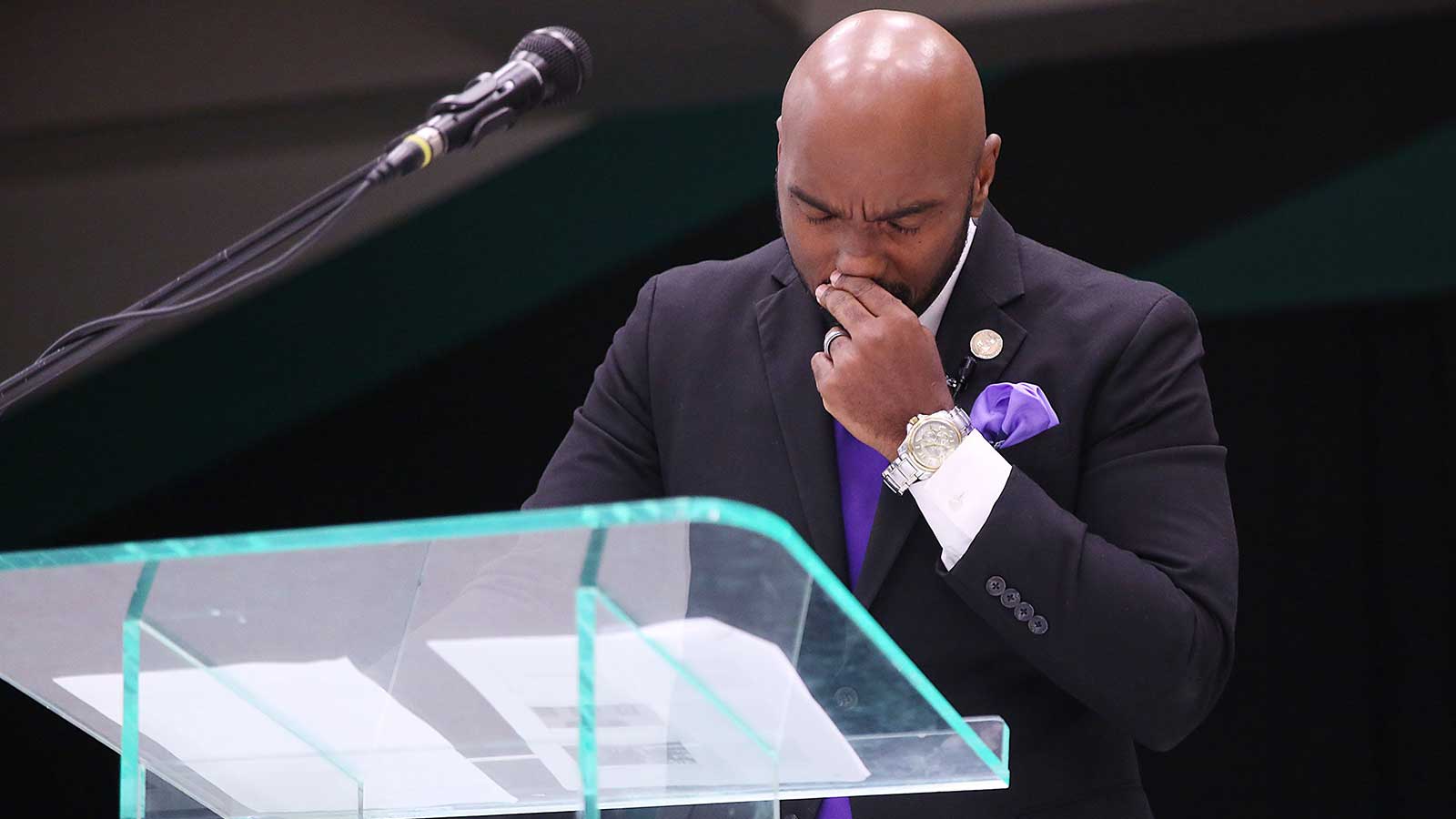 “They do know what’s going on. They’re not just a name, a fleeting placeholder — they’re actively involved; we actually talk to them. They actually want to have justice and reparations,” the attorney said in a recent interview.

Solomon-Simmons pointed to a California case as a recent example of a government entity coming to terms with the racial injustices of the past and how they could be resolved through reparations.

The Tulsa native referred to Los Angeles County’s decision in April to return prime beachfront property to descendants of Charles and Willa Bruce, a Black couple who built a seaside resort for African Americans in 1912 only to have their property taken away through eminent domain in the 1920s by the Manhattan Beach City Council, according to an Associated Press report.

“My survivors are saying, ‘Hey, this can happen. People can do the right thing.’ That’s what we’re hoping happens here,” Solomon-Simmons said. 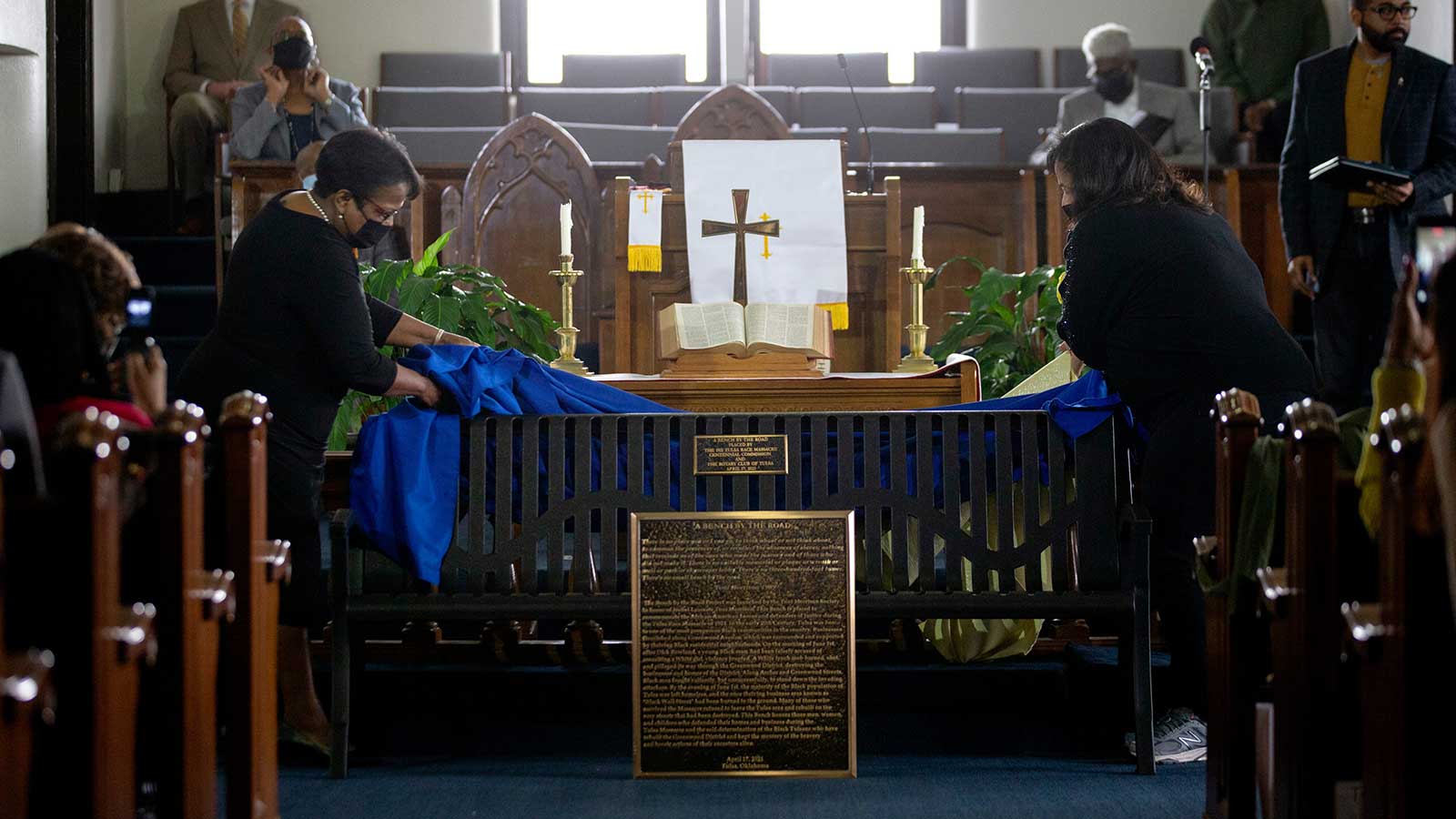 A bench that will be placed at the corner of Greenwood Ave. and Archer Street is unveiled during a ceremony for two benches inside the Vernon A.M.E. Church in the Greenwood District of Tulsa, Saturday, April 17, 2021. The two benches to be placed in the Greenwood District are part of the Toni Morrison Society’s Bench by The Road project and were unveiled during a ceremony in conjunction with many events marking the Tulsa Race Massacre centennial. Bryan Terry, The Oklahoman

This premise formed the basis of the lawsuit Solomon-Simmons filed in September 2020 against the city of Tulsa, along with other defendants, including Tulsa Regional Chamber, Tulsa Development Authority, Tulsa Metropolitan Area Planning Commission, Tulsa County Board of Commissioners, Oklahoma Military Department and the Tulsa County sheriff.

The lawsuit alleges that during and following the massacre representatives of Tulsa government looted and stole the property and wealth of the Greenwood community and actively prevented the survivors and their descendants from rebuilding their homes and businesses — actions that have plagued the Greenwood area and Black residents of North Tulsa for generations.

Solomon-Simmons, a civil rights attorney, said it’s important to note that the 1921 massacre is not the only focus of the lawsuit.

“We’re really trying to focus people’s attention that this is not just about something that happened 100 years ago, that this is something that is continuing harm. My co-counselors understand what is generational wealth and how, when it is cut off, there’s an impact today,” he said.

Michael Swartz and Sara Solfanelli, with Schulte, Roth & Zabel, are acting as co-counsel on the lawsuit. 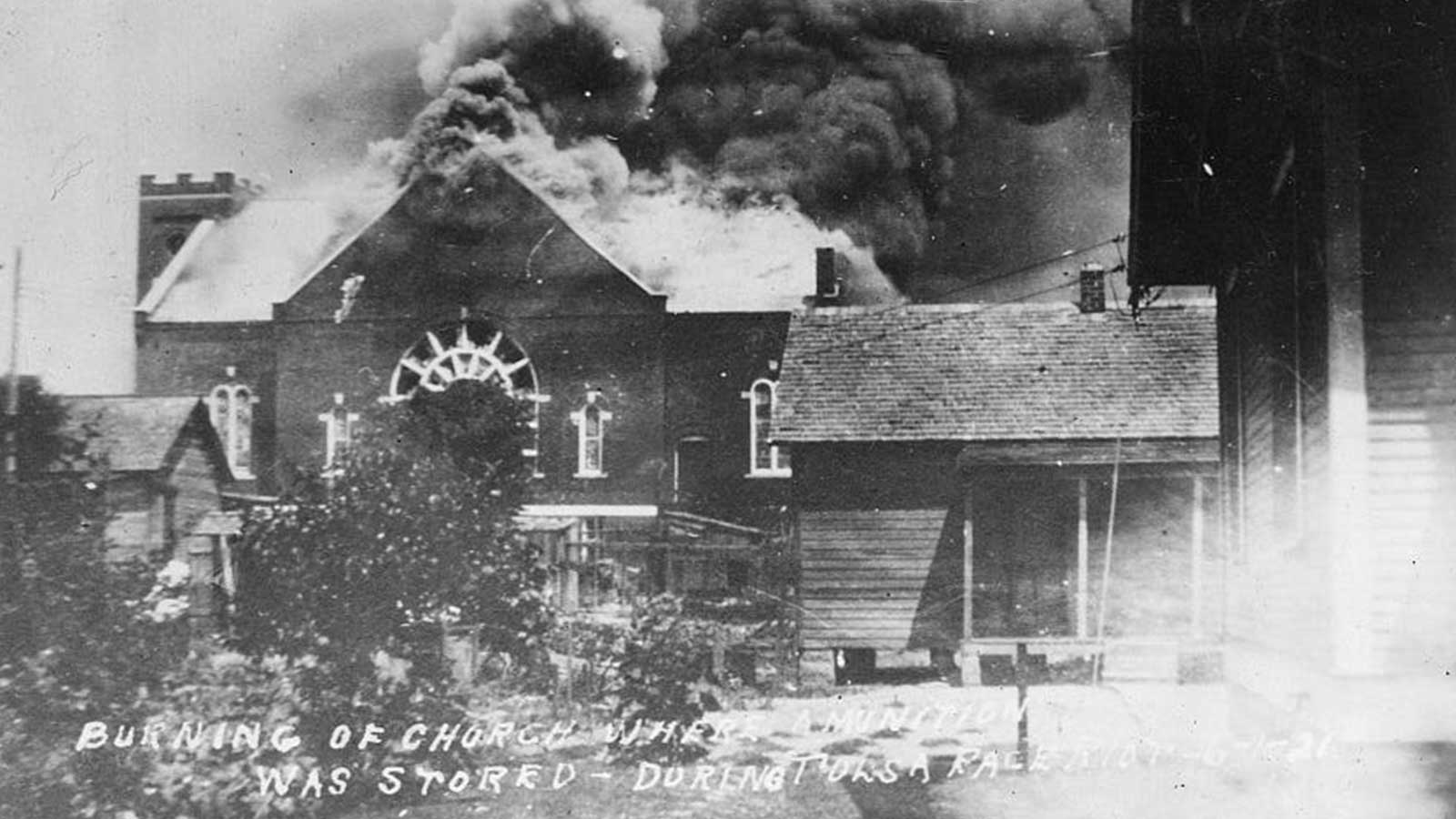 Swartz discussed the expansive nature of the lawsuit.

“The litigation is part of the overall strategy for the Greenwood community to take back its voice,” he said.

“We’re really looking at all the actors who were involved at the time of the massacre, including insurance companies that denied claims wrongfully, other businesses and reaching out to them to let them know of their predecessor companies, what was done previously that prevented people from obtaining financial remediation at the time and that continued to impact people.”

Swartz said the attorneys are also seeking to address disparities to point out “that there’s a huge gap in the wealth, in part, because of lots of actors in the city, and a lot of commercial actors who didn’t act appropriately either.”

A ‘great honor’ to represent Tulsa survivors in reparations fight

Solomon-Simmons said many people have responded favorably to the idea of reparations for the horrific events that unfolded a century ago.

“We’ve received mostly positive comments, from what I’m hearing. Most people that I’m in contact with or who have contacted me have said this needs to happen. They want to see justice,” he said.

There have been some naysayers, but Solomon-Simmons said he takes that in stride.

“I did receive some negative feedback from those who don’t believe in justice, including a couple of lawyers. I got an email from a lawyer who was very upset that I would ‘bring this up from the past,'” he said.

The attorney said he will continue the fight for reparations because it’s the right thing to do — and all with the survivors in mind.

“It’s the great honor of my professional career to represent these truly amazing people that have gone through so much and been on this Earth for so long,” Solomon-Simmons said.

“Every time I’m around them, there’s an emotional response because on one aspect, I can’t even imagine how they were able to even live one day with this trauma. And then on another aspect, they are so inspirational to survive enough to raise a family and still want to live. It’s been a great honor, a tremendous honor.”

The three remaining survivors of the 1921 Tulsa Race Massacre testified before Congress in Washington, D.C., asking leadership to deliver justice.

Featured image: Ms. Viola Fletcher, one of the three remaining survivors of the 1921 Tulsa Race Massacre who testified before Congress in Washington, D.C.