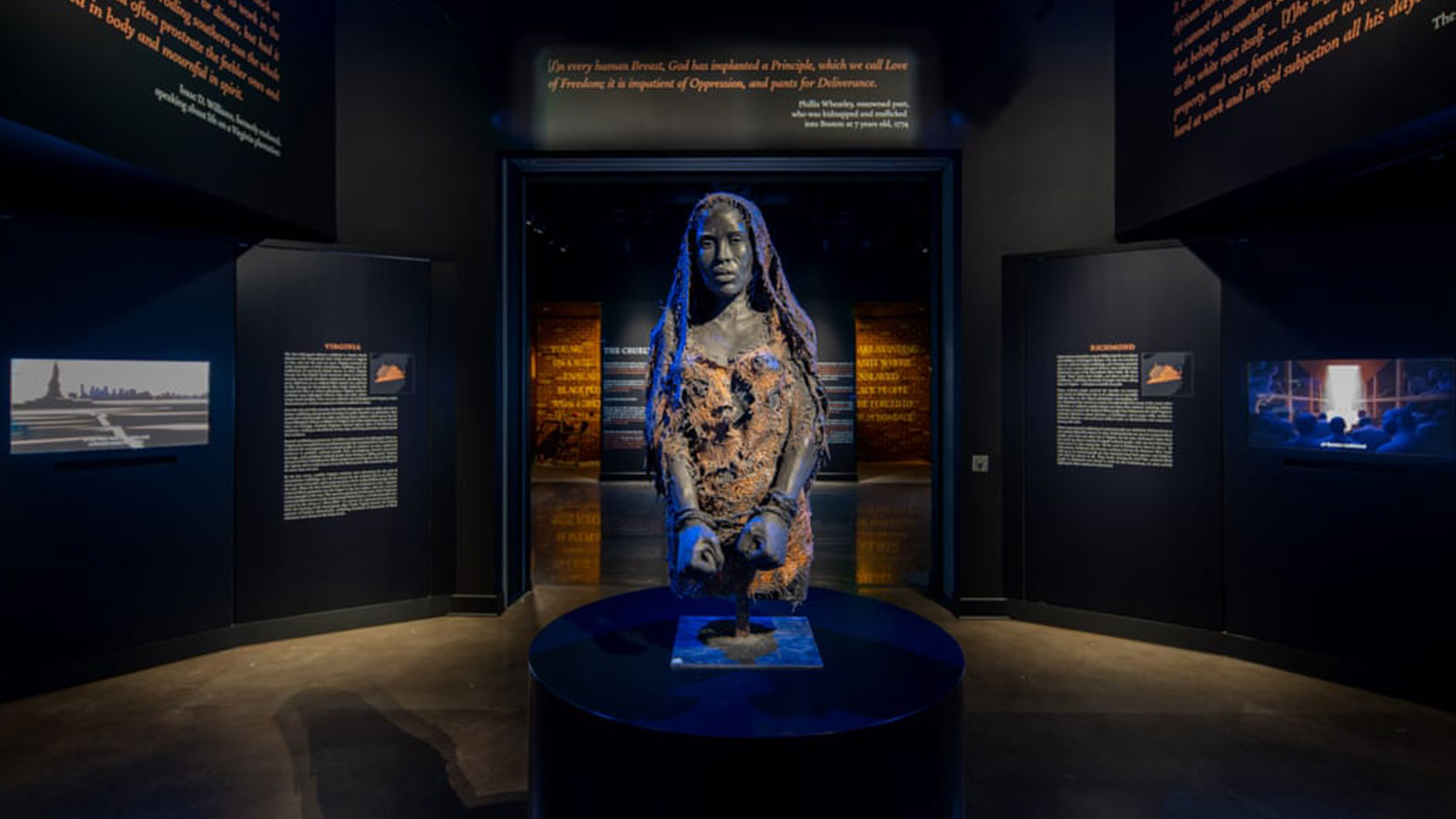 ‘Truth-telling has to happen’: the museum of America’s racist history

The Legacy Museum, opening in October, lands at a time when racial violence is again on the rise and critical race theory is being used to prevent America’s racist past being taught in schools.

By Ed Pilkington, The Guardian —

A 30ft wave crashes over your head as you enter the museum, dragging you instantly down into the roiling waters. The waves keep coming at you in gunmetal grey surges, with nothing to cling to amid the loneliness of the sea.

Across the giant screen in front of you, words start emerging that ask you to reflect on “the terrifying, tragic and deadly ocean journey” which 12.7 million men, women and children were forced to make having been kidnapped from their homes in Africa and sold into slavery. For about 2 million of them, the voyage to the Americas would end “in a watery grave at the bottom of the Atlantic Ocean”. 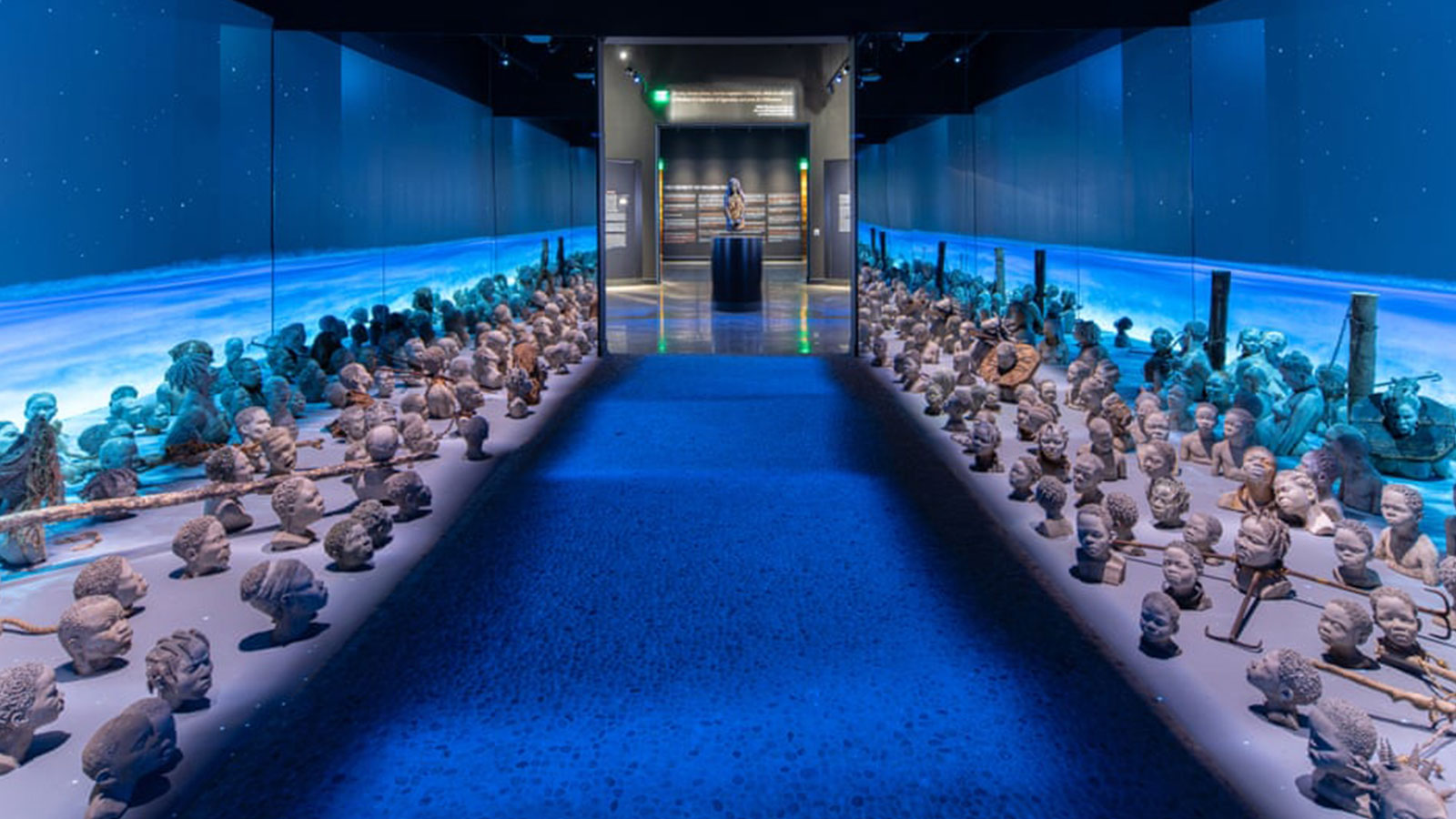 The cinematic representation of the horror of the middle passage forms the start of an agonizing journey through the Legacy Museum: From Enslavement to Mass Incarceration.

As the name suggests, the visitor is taken on a white-knuckle ride through some of the most painful elements of America’s long history of racial injustice – slavery, lynching, segregation, all the way to the present-day epidemic of police killings of African American teenagers and the societal addiction to putting Black people behind bars.

Bryan Stevenson, the mastermind behind the Legacy Museum, sees such searing detail as bitter but necessary medicine for the American soul. The new institution, which starts on 1 October, lands at a time when racial violence is again on the rise and when “critical race theory” is being used as a ruse to prevent the history of America’s racist past being taught in schools. 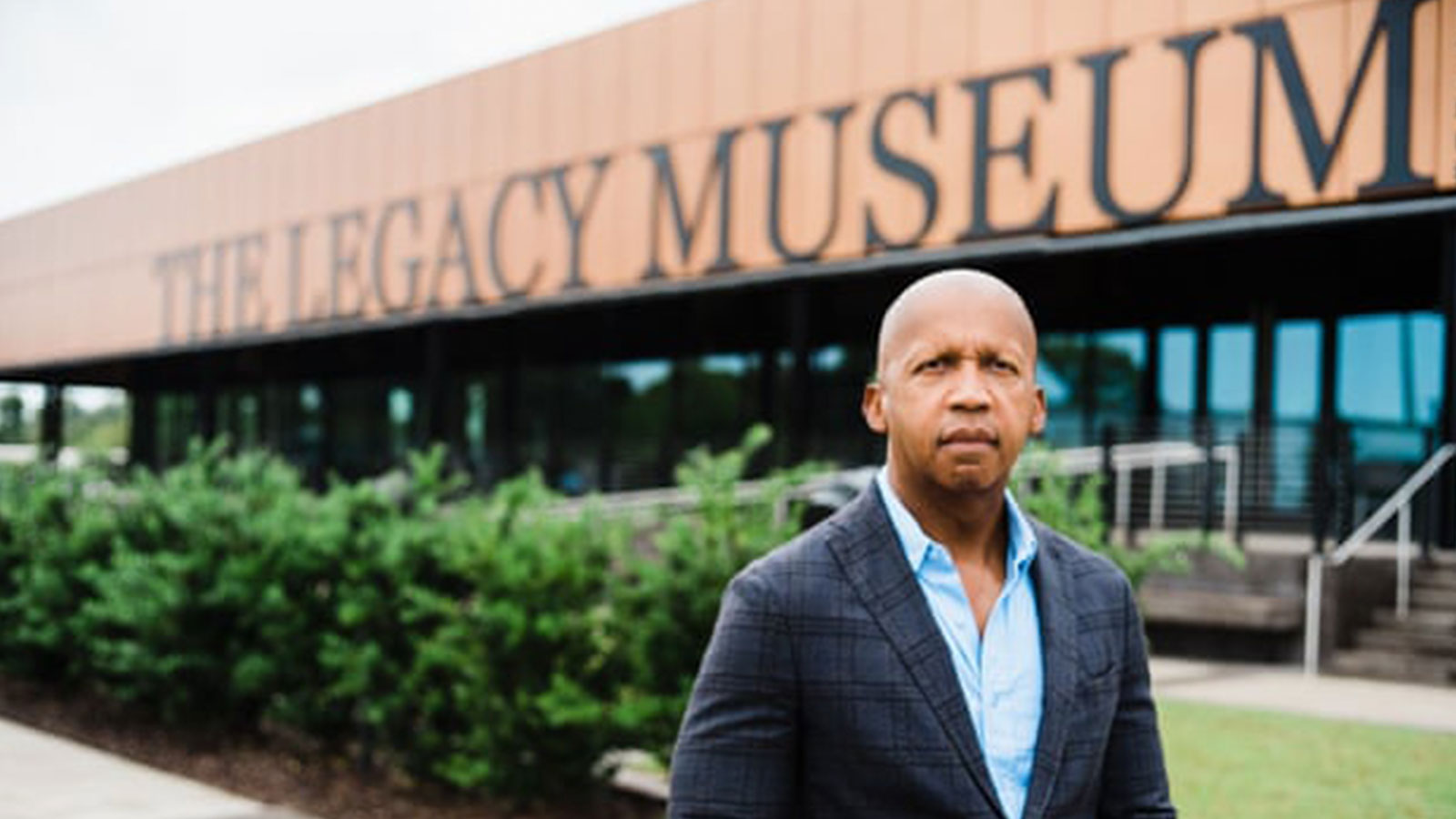 It will open its doors less than a year after a white mob spearheaded by far-right groups and fueled by white supremacist anger stormed the US Capitol, egged on by the then US president.

“We really felt the need to be even more precise in detailing the harm that people in this country have inherited and failed to address,” Stevenson said. “In a moment when it’s so tempting to say that’s not true, it didn’t happen, it wasn’t that bad, when all these false narratives are being created, we had to be even clearer about the nature of the injury that was done.”

The Legacy Museum is the latest manifestation of a vision of truth-telling and repair that Stevenson, 61, has been developing for years. His ruminations began when he first came down to the deep south as a young Harvard Law graduate in the early 1980s.

He cut his teeth fighting for justice for innocent death row inmates, which became the subject of his 2014 memoir, Just Mercy, and the subsequent movie of the same name in which he is played by Michael B Jordan. The non-profit he founded, Equal Justice Initiative (EJI), has won reversals, relief, or release from prison for more than 140 wrongly condemned prisoners on death row. 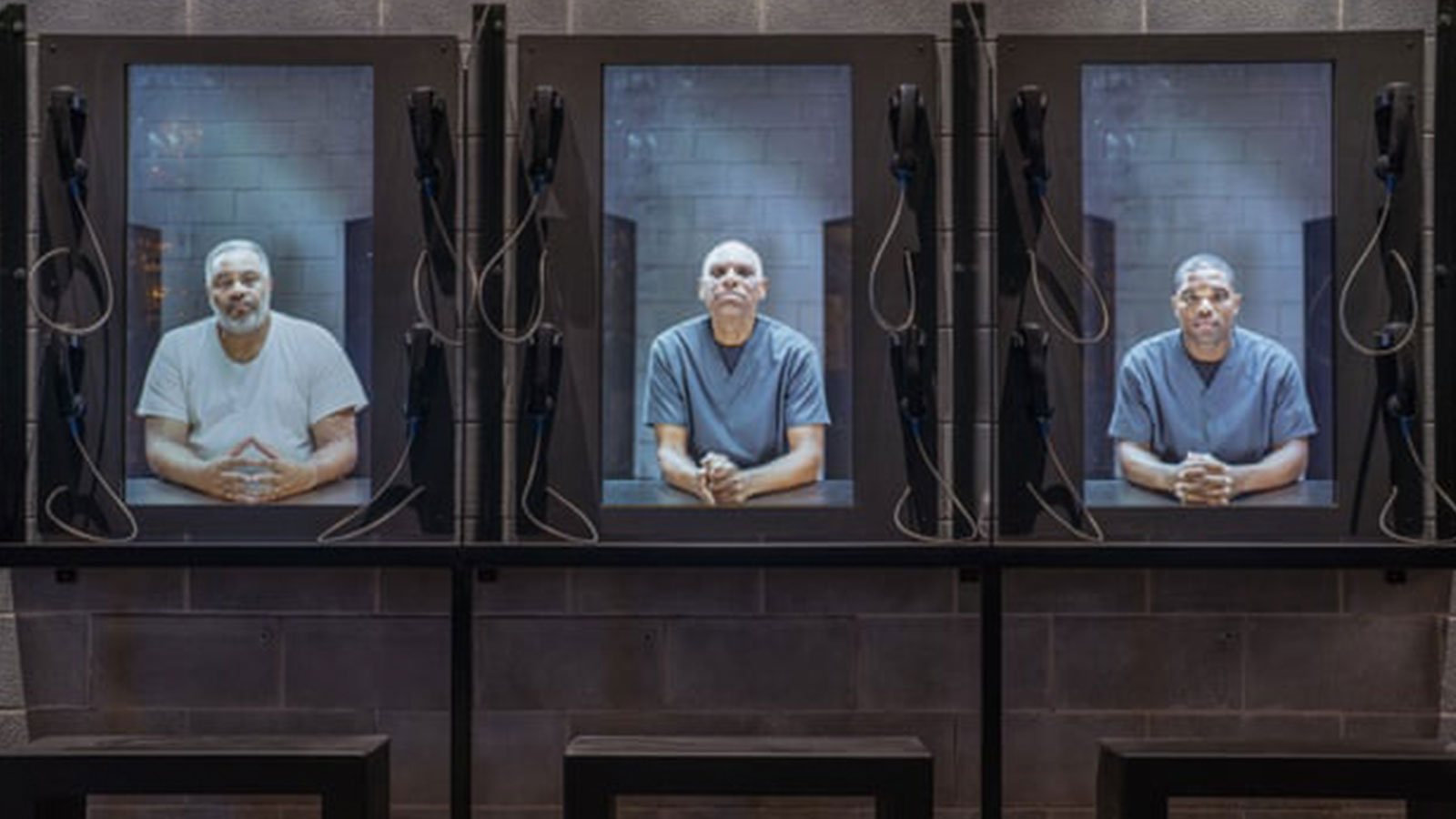 Over the years he reflected on why it was that 42% of America’s death row inmates are African American when the Black population makes up just 13% of the US total. He kept being drawn back into American history, and what had happened in his adopted home of Montgomery.

The Alabama capital was the site of the first Confederate White House, where Jefferson Davis was sworn in as president of the Confederacy. When Stevenson arrived in the city, all its main public monuments were devoted to glorifying white supremacy.

“In the 1980s you couldn’t find the word slavery anywhere in Montgomery. There were 59 markers and memorials to the Confederacy. Jefferson Davis’s birthday is still a state holiday in Alabama, as is Confederate Memorial Day.”

Stevenson’s response has been to slowly, stealthily remake the city in a very different mould. The monuments he is championing are devoted to memorializing not the Confederacy but the horrors of racial injustice and honoring not only its many victims but also the courageous civil rights activists who fought against it.

He began by putting up markers to the slave trade which are now dotted through Montgomery. Then in 2018 he opened the first national memorial to the more than 4,000 people of color who were killed in racial terror lynchings, the National Memorial for Peace and Justice which sits audaciously on top of the hill overlooking the state capitol.

Now he has taken the nascent Legacy Museum that opened in 2018 and expanded it fourfold into a giant 40,000 sq ft space in which his desire for truth-telling vision has room to flourish. The new exhibition is housed on the exact location of a former slave warehouse where Black people were held in bondage, forced to process cotton and held in pens in preparation for being sold. 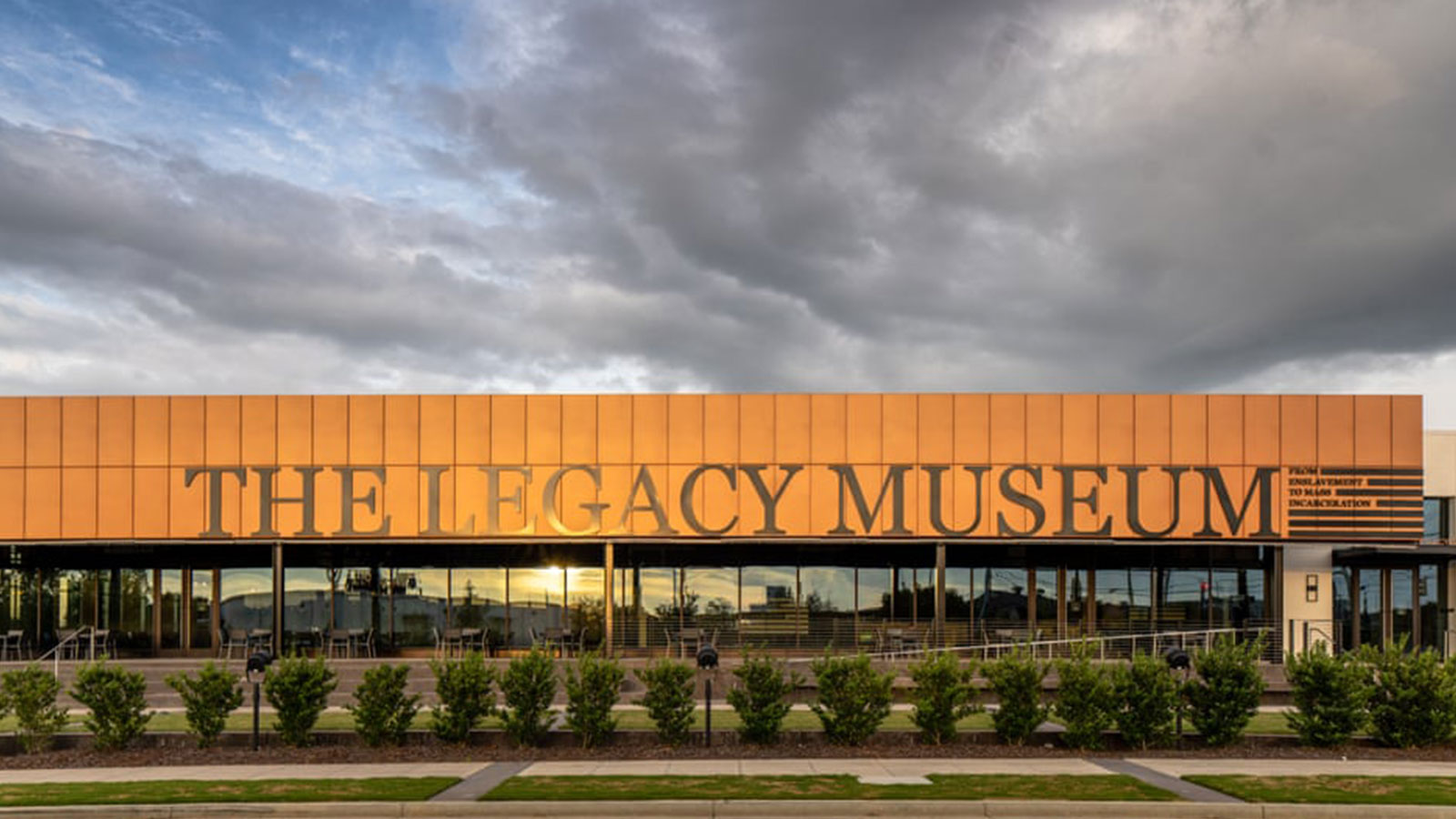 The new exhibition is housed on the exact location of a former slave warehouse where Black people were held in bondage, forced to process cotton and held in pens in preparation for being sold. Photograph: Courtesy of Equal Justice Initiative/Human Pictures

Stevenson’s hope is that if Montgomery – a cradle of the Confederacy, ground zero of lynchings, birthplace of the civil rights movement – can be reconfigured from a city glorifying slavery into one dedicated to racial healing, then anything is possible.

“If we can create a new architecture, a new landscape, a new conversation, a new relationship to history in Montgomery, Albama, then there’s not another community in the country that can say, ‘We can’t do that.’”

Which brings the story back to the 30ft cinematic Atlantic wave crashing over our heads at the entrance to the new museum. Stevenson said that he wanted to immerse visitors into the violence that the ocean represented to so many kidnapped Africans.

“We did something to millions of people to disconnect them not just from their families and homes but from their identities. Two million people died during the middle passage, there are hundreds of thousands of bodies buried at the bottom of the Atlantic Ocean, and yet we are more interested in exploring the wreck of the Titanic than this unparalleled human tragedy,” he said. 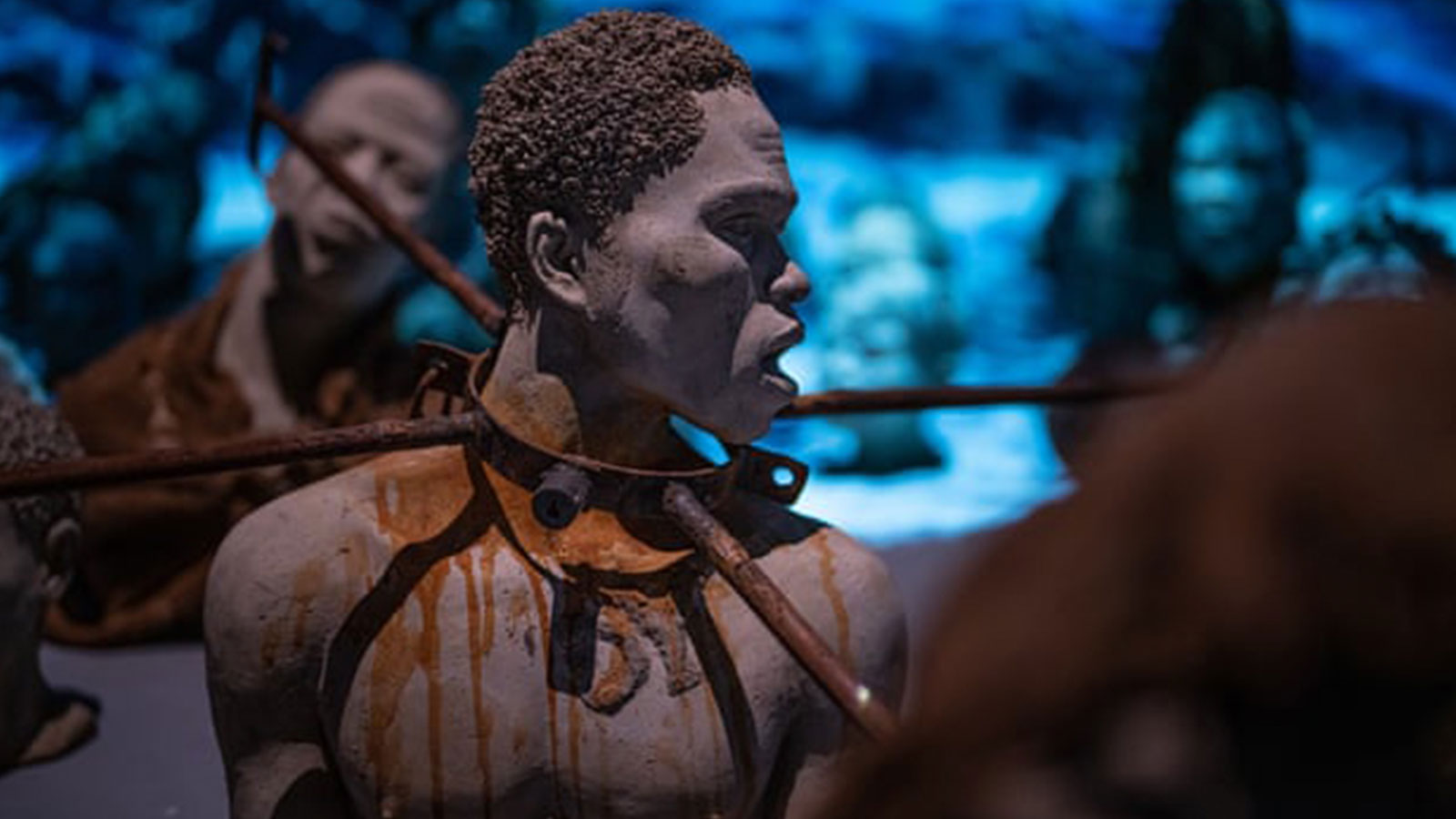 ‘We did something to millions of people to disconnect them not just from their families and homes but from their identities.’ Photograph: Courtesy of Equal Justice Initiative/Human Pictures

From the trauma of slavery, the museum’s journey takes you through the slim glimmer of hope that was emancipation and the Reconstruction period into the renewed subjugation of lynching. A wall of contemporary newspaper headlines records such unconscionable events as: “Lynched Because He Didn’t Say ‘Mr’”, “Oil Soaked Negroes Burned” and “Triple Lynching in Georgia – Lynchers Could Not Find the Negro They Wanted and So Took Three Others”.

The museum traces how when lynching began to decline in the 1930s, the white mob gentrified its violence and took it indoors. White supremacy found a new home in the legitimized, sanitized manifestation of racial terror killings that is the death penalty. 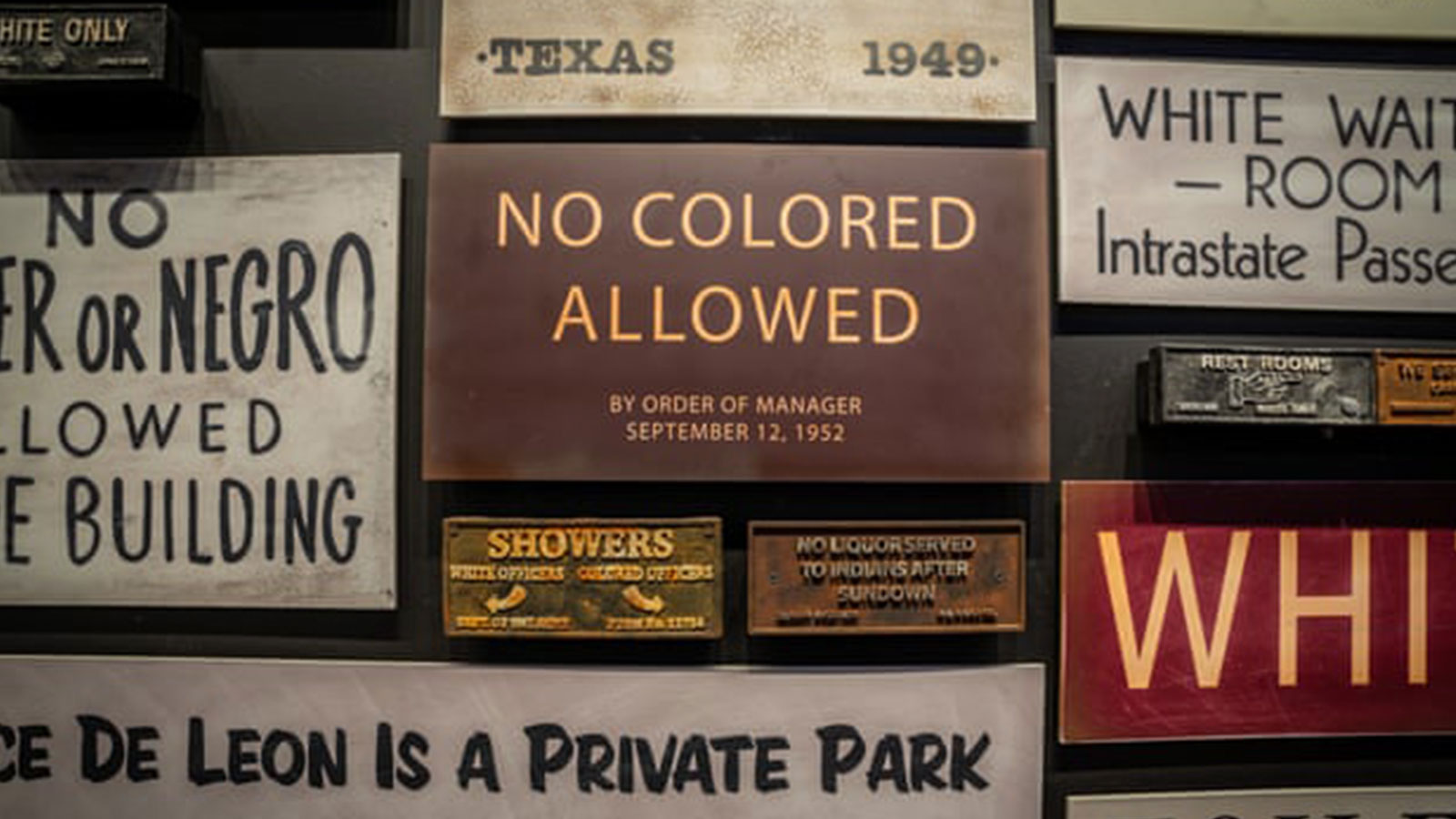 ‘We have helped people understand that we can talk about slavery, lynching, segregation, mass incarceration, and survive.’ Photograph: Courtesy of Equal Justice Initiative/Human Pictures

Later rooms explore the battle to secure fundamental freedoms in the civil rights era, including Montgomery’s own bus boycott. Then the Legacy Museum arrives at the present day.

It is here at the end of the museum’s journey that Stevenson’s holistic vision becomes clear – history must be understood not only as an end in itself but as a cure to the sickness coursing through the veins of modern America.

“This is about changing the larger narrative,” he said. “Most people in this country, to the extent they knew anything about slavery, they were taught it was benign and not that big a problem; they knew nothing about lynching; and when you get to segregation, well Black people wanted it that way, they wanted their own schools. You end up in a place where you just don’t think we’ve done anything so problematic that we need to talk about it.”

The new Legacy Museum opens at an exceptional moment for America. On the positive side, last year’s wave of Black Lives Matter protests inspired a rethinking of the past that led to scores of Confederate monuments being toppled, including the statue of Robert E Lee that was removed earlier this month in the slave-owning capital of Richmond, Virginia.

But such winds of change only go so far in Stevenson’s reckoning. For him, fundamental change first requires truth-telling.

“We are in this phase where truth-telling has to happen. It’s going to require more than taking down statures, more than the easy symbolic stuff. The harder stuff is, what does it mean that most of us were born in this country at a time when there were legal restrictions on who you could love. What’s the legacy of that?”

Then there is the negative side of the present moment. The museum makes plain that the sores of America’s racial wounds remain very much open.

It records the fact that Black children today are killed by police at six times the rate of white children. That 2.3 million people are still incarcerated, affecting all Americans – almost two-thirds of all adults in the US, whatever their race or ethnicity, have family members who have been behind bars. 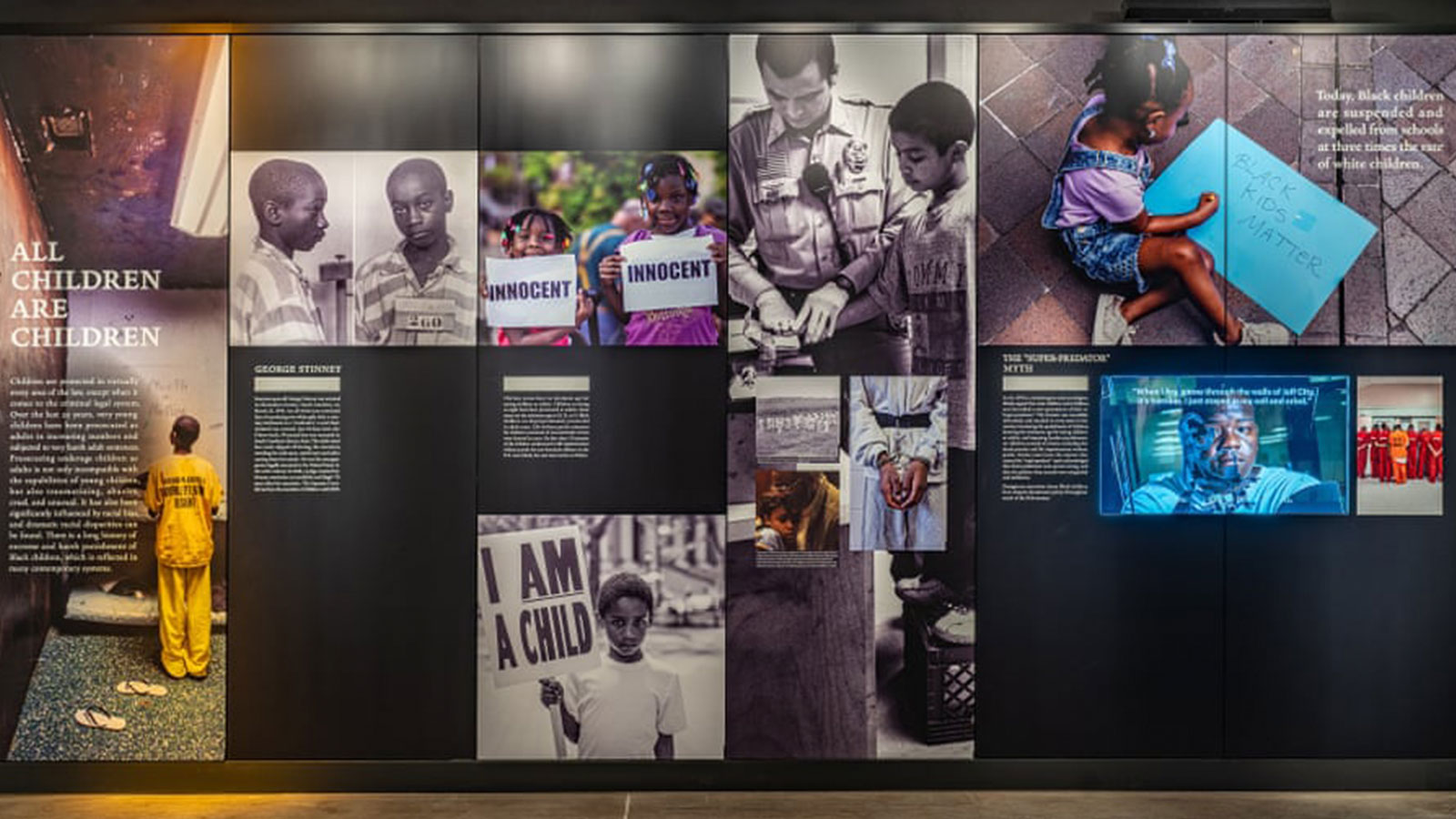 Many of the exhibits trigger chilling parallels with the modern day. A room that examines the myriad imaginative ways in which Black citizens were disenfranchised in the deep south – answer the question “How many bubbles are in a bar of soap?” or you don’t get registered to vote – is resonant at a time when voter suppression is once again sweeping the country.

The disturbing images displayed at the museum of white men at public lynching spectacles, their faces contorted into wild, elated grimaces, beg comparison to the expressions of the mob that stormed the US Capitol on 6 January. The same white rage, aggravated by fears of Black democratic participation, fueled both.

“That’s the problem with fear and anger,” Stevenson said. “It’s toxic, it’s infectious and it will destroy a healthy democracy. Which is why no one should be indifferent to the threat that these events represent.”

Visitors to the new museum are likely to emerge from the end of all this challenged and shaken. But the journey contains a note of healing.

One of the final rooms is a large “reflection space” given over to the stories of 400 people who had the courage to stand up against racial injustice. Some are familiar – Rosa Parks, Billie Holiday, WEB Du Bois, John Lewis – others have all but been forgotten. 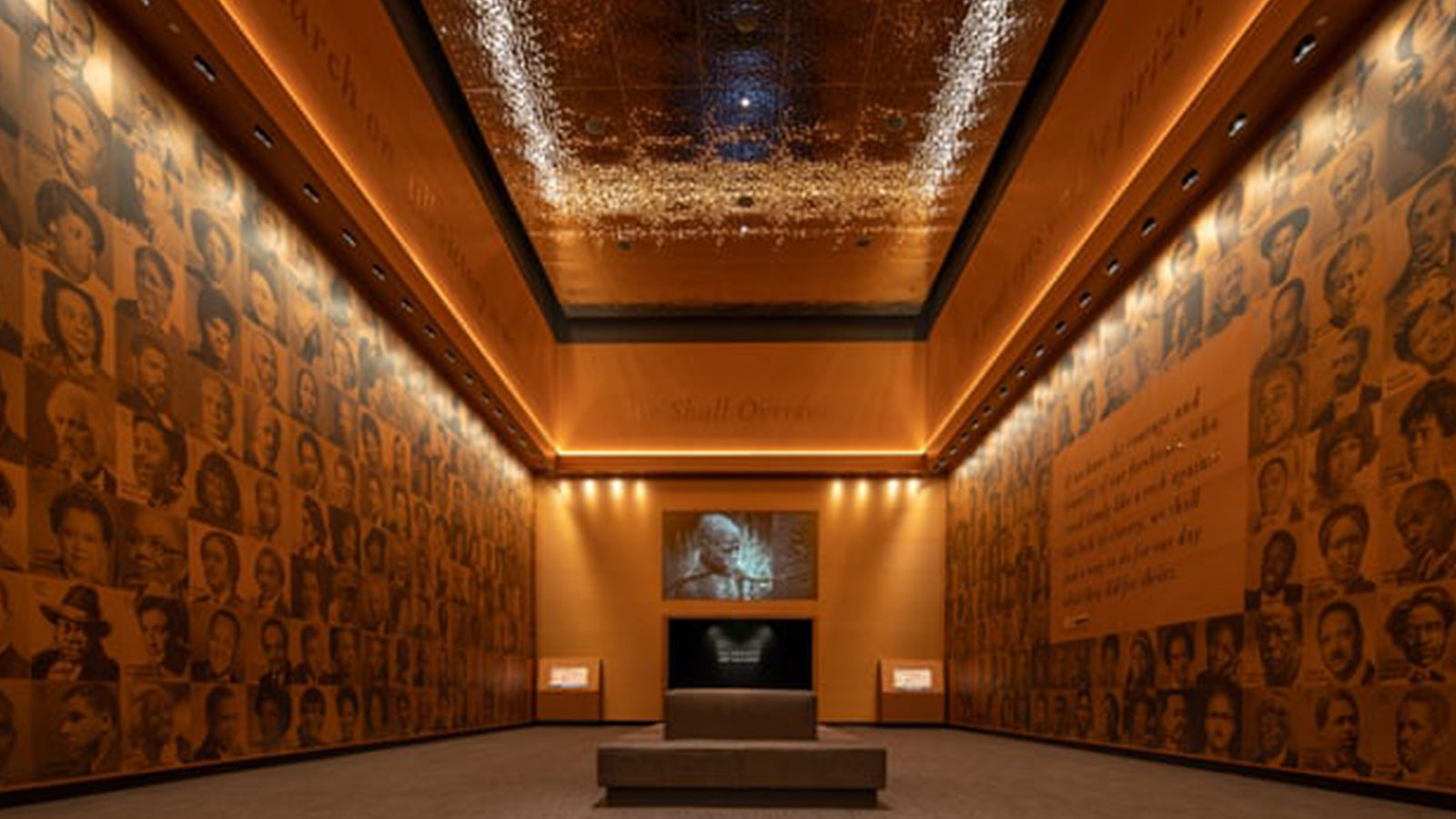 ‘[Fear and anger] will destroy a healthy democracy. Which is why no one should be indifferent to the threat that these events represent.’ Photograph: Courtesy of Equal Justice Initiative/Human Pictures

Stevenson hopes the room will inspire people to action, and act as a segue to the next chapter in his ambitious plan. After the truth-telling comes the remedy and repair.

His team has started to reach out to a range of institutions – hospitals, schools, banks, insurance companies, professional sports teams, newspapers – inviting them to engage with EJI and launch their own truth and justice project. “These are institutions with histories and they have an obligation to repair the damage they’ve created,” he said.

He hopes that by now people will appreciate that the lessons of history are not debilitating, they are restorative. “We have helped people understand that we can talk about slavery, lynching, segregation, mass incarceration, and survive. The world will not end. It will not erupt into flames. And we will get to a better place.”