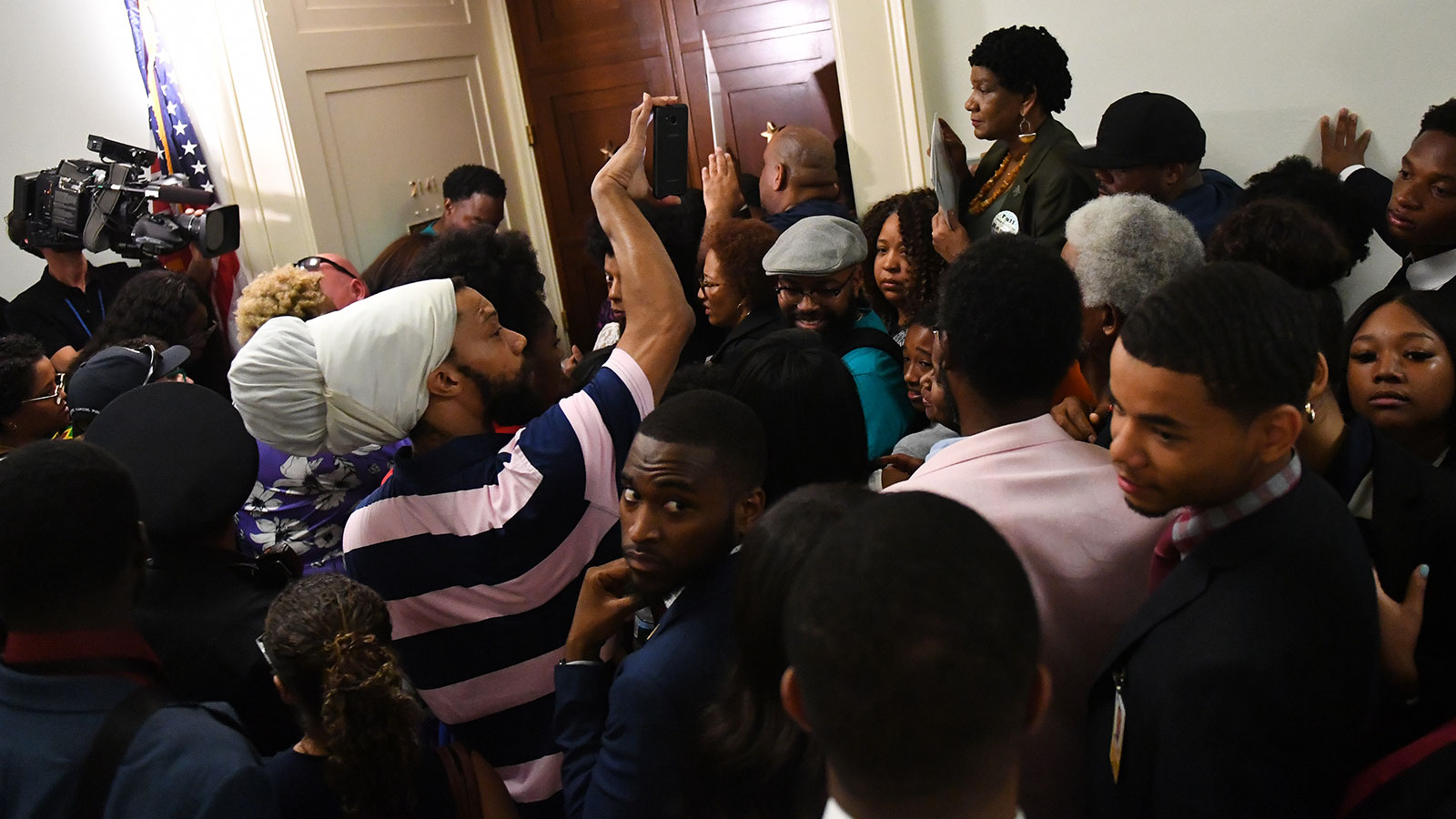 A coalition of dozens of human rights organizations and racial justice advocates sent a letter to the White House Wednesday, demanding that President Biden issue an executive order to create a commission to study reparations for slavery.

The letter marks a change in strategy by advocates of reparations, who have long pushed for Congress to pass H.R. 40, a bill that would establish a commission to study reparations. In April 2021, the House Judiciary Committee voted to advance H.R. 40 for the first time since it was introduced in 1989.

Last June, White House press secretary Jen Psaki said Biden supported a number of components of the bill. “He, of course, supports a study of reparations,” Psaki said, “and feels that would be the best next step.”

But the push for a reparations commission has faced staunch opposition in the Senate. In 2019, then-Senate Majority Leader Mitch McConnell (R-Ky.) told reporters he did not support reparations. “I don’t think reparations for something that happened 150 years ago, for whom none of us currently living are responsible, is a good idea,” McConnell said. “We tried to deal with our original sin of slavery by fighting a Civil War, by passing landmark civil rights legislation. We elected an African American president.”

Senate Majority Leader Charles E. Schumer challenged McConnell’s comments. “What McConnell said is just preposterous,” Schumer told reporters after the bill was reintroduced by Sen. Cory Booker (D-N.J.) and Rep. Shelia Jackson Lee (D-Texas) in 2019. “The legacy of slavery and Jim Crow are still with us.”

The groups that signed the letter include the National Coalition of Blacks for Reparations in America; the National Action Network, led by the Rev. Al Sharpton; the racial justice organization Color of Change; and the international advocacy group Human Rights Watch. The letter represents a recognition that unilateral executive action might be the only realistic path forward for reparations amid stalled progress in Congress.

A year after the Judiciary Committee vote, these activists say there is a growing urgency to establish a commission.

“Now more than ever, we know that many of the racial disparities that weigh this country down, and divide people in the US from each other, are unnecessary and can be eradicated if we address the ongoing legacy of enslavement,” says the letter, sent to the White House by email and Postal Service. “By righting our wrongs, we can make sure that all families in the US get a fair chance to acquire land, to buy a home, to enjoy good health, and to live without fear about tomorrow. That is why we write to request that you create by Juneteenth an expert commission like that which would be established by a bill in Congress, H.R. 40.”

Advocates for a commission say that slavery drove the economy of the country, while the enslaved Black people were paid nothing for the forced labor. A commission would examine reparations not just for slavery, but also for the racial oppression that followed, including Jim Crow laws and black codes that denied Black Americans opportunities for education, housing and jobs.

“The lack of moral and political will to begin the process of reparations continues to be a bloody stain on our collective identity and consciousness,” said Dreisen Heath, a racial justice researcher at Human Rights Watch who testified about reparations before Congress last year. “President Biden supports a study of reparations and can steer the country on a healthier, less destructive course by using his executive power to establish a federal reparations commission now.” 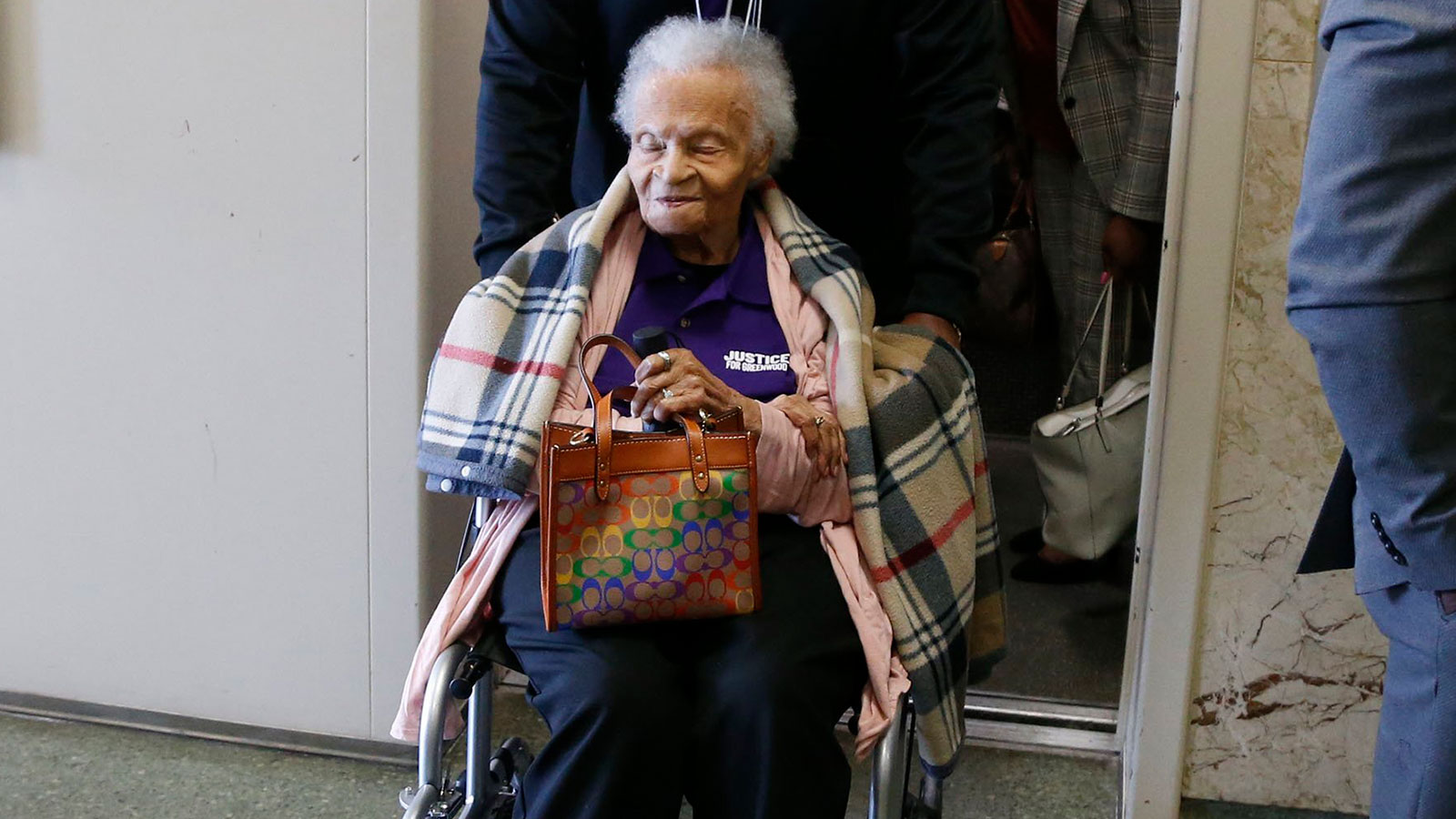 Viola Fletcher, 107, a survivor of the 1921 Tulsa Race Massacre, attends a hearing at the Tulsa County Courthouse on May 2. A judge ruled that a lawsuit can proceed that seeks reparations for survivors and descendants of victims of the massacre. (Stephen Pingry/Tulsa World/AP)

In 1989, Rep. John Conyers Jr. introduced legislation to create a commission to develop proposals for reparations, which he reintroduced each new Congress. After Conyers retired in 2017, Rep. Sheila Jackson Lee (D-Tex.) took over sponsorship the bill in Congress.

“This is a very historic moment in the history of the United States,” Lee told The Post. “There is a reckoning across the nation regarding restoring and repairing.”

She added, “The White House has been an important factor in understanding the impact of slavery. I hope receiving this information will help us members of Congress working with the language of H.R. 40.”

The first reparations for enslaved Black people came in January 1865, after Maj. William Tecumseh Sherman’s “march to the sea” shortly before the end of the Civil War. Sherman met with 20 Black ministers in Savannah, Ga., and asked how newly freed Black people could best survive economically after more than 200 years of enslavement and brutality.

“The way we can best take care of ourselves is to have land, and turn it, and till it by our own labor — that is, by the labor of the woman and children and old men; and we can soon maintain ourselves and have something to spare,” responded the Rev. Garrison Frazier, 67, who had purchased his freedom along with his wife’s. “We want to be placed on land until we are able to buy it and make it our own.”

Four days after Sherman’s meeting with the ministers, he issued Special Field Order No. 15, seizing Confederate land along the coast from South Carolina to Florida. Sherman promised “40 acres and a mule” for thousands of Black families, a move historians would later refer to as the first act of reparations for enslaved Black people.

More than 400,000 acres of land were seized, according to the Library of Congress. Families of formerly enslaved Black people would receive as many as 40 acres. The Army would lend them mules no longer in use.

But those reparations would not last long. The federal government soon reneged on its promise. On May 29, 1865, President Andrew Johnson issued an amnesty proclamation that gave the land back to White southerners who took a loyalty oath.

“By the latter part of 1865, thousands of freed people were abruptly evicted from land that had been distributed to them through Special Field Orders No. 15,” the National Archives reported. “With the exception of a small number who had legal land titles, freed people were removed from the land as a result of President Johnson’s restoration program.”

Thousands of Black people were stripped of land and eventually forced into sharecropping and peonage.

In February, a coalition of more than 360 organizations sent a letter to Congress, urging it to “immediately bring” H.R. 40 to the full House floor. The commission, the letter said, would resemble the panel that investigated the forced relocation and incarceration of Japanese Americans during World War II.

“For those of us in the Japanese American community, redress happened for us close to 40 years ago,” Inoue said. “It’s as simple as passing a commission to research and investigate reparations. It is beguiling it has not happened at this point.”

Inoue said he thinks the move to go directly to the executive branch is imperative because of the stalemate in the House and Senate.

“It’s probably never going to happen that we will be able to move a [reparations] bill through the Senate,” agreed Kenniss Henry, national co-chair for the legislative commission of the National Coalition of Blacks for Reparations in America. “This is our moment.”

It is still unclear what reparations would look like, but the commission would make proposals.

“You can never completely repair the harms,” Henry said, “but you can make some major inroads. It is the same as trying to put a price on 256 years of forced free labor. You can create an algorithm to give you a ballpark figure.”

Nkechi Taifa, director of the Reparation Education Project, which signed Wednesday’s letter, said the federal government is lagging behind state and local jurisdictions that are moving ahead with reparations.

In 2019, the city council of Evanston, Ill., approved the first allocation of a reparations fund that would issue $400,000 in housing assistance to Black residents who lived in the city from 1919 to 1969 or were direct descendants of people harmed by discriminatory housing practices in this period.

“We have a once-in-a-lifetime opportunity,” said Taifa. “We are in control of the House, the Senate and the presidency. To let this opportunity wash away would be unconscionable for future generations.”

Featured image: People jam the hallways of the Rayburn House Building to get into a reparations hearing on June 19, 2019, in Washington. (Katherine Frey/The Washington Post)