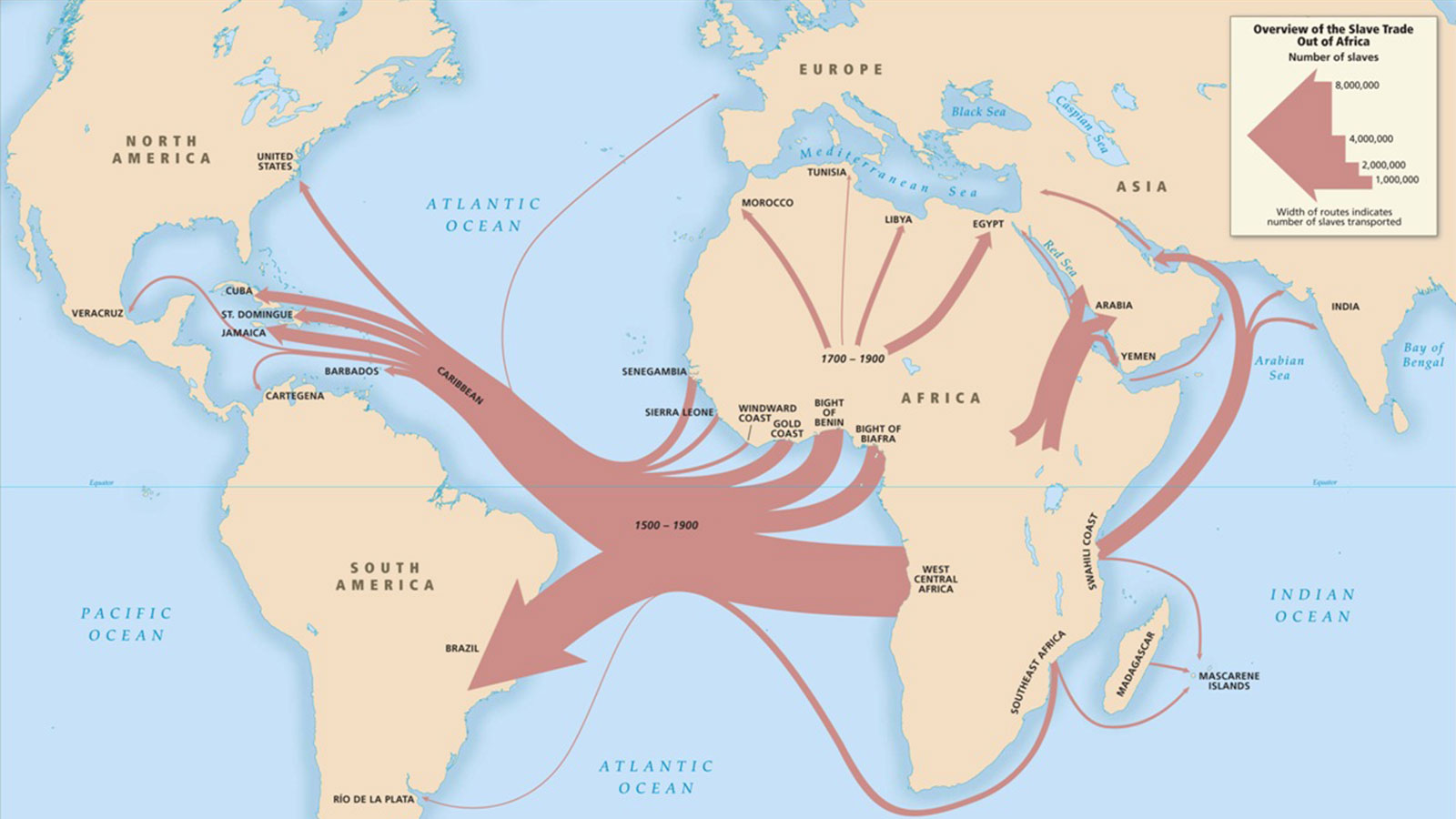 Exploding the Myth of African Responsibility for Slavery (Part 1)

Now that our Caribbean governments have launched a serious effort to secure the payment of Reparations for the tremendous damage inflicted on the people of Africa and the African Diaspora during the centuries of European orchestrated slave trade and enslavement, a number of “fifth columnists” have crept out of the proverbial woodwork and are seeking to confuse the issue with allegations that our African ancestors not only collaborated with the European enslavers, but were so accepting of the slave trade that they refused or neglected to resist it.

The only way to respond to this type of mischievous propaganda is to subject it to the cold hard undisputed facts of history! So, before we even consider the issue of Africans who collaborated with the European enslavers, let us begin with a consideration of the methods by which the various European powers commenced their trade in African human beings on the west coast of Africa.

Portugal commenced the trans-Atlantic slave trade in 1444 with a raid on the western coast of the African territory that is today known as Mauritania. This is how Gomes Eannes de Zurara, a courtier of the Portuguese Royal Family, described the event in his “Chronicle of the Discovery of Guinea”:-

“Most of the captives… had been taken in a village where ……. they (the Portuguese), shouting out, “St. James, St George, and Portugal,” at once attacked them, killing and taking all they could. Then might you see mothers forsaking their children, and husbands their wives, each striving to escape as best they could. Some drowned themselves in the water, others thought to escape by hiding under their huts, others stowed their children among the seaweed, where our men found them afterwards……..”

The British “trade”, on the other hand, started with the two voyages of Captain John Hawkins in 1562 and 1564. This is how these voyages were described in several publications, including the 1878 publication of the Hakluyt Society entitled “The Hawkins Voyages”:-

“Hawkins sailed with three ships from England in 1562 ……. in the River Sierra Leone, he captured at least 300 blacks, partly as he said, “By the sword, and partly by other means”……… In 1564 …….. Hawkins set out on a second voyage …… The new expedition again made for the River Sierra Leone ….. and every day, went on shore: “to take the Inhabitants …… burning and spoiling their townes”.

So, we can see from these two examples that this so-called “trade” began with European criminals inflicting murder, mayhem and terror on defenseless towns and villages along the west coast of Africa. There was no talk of collaborators in these beginning phases of the trans-Atlantic Slave Trade!

From these beginnings of attack, de-spoilation and mass kidnapping, the Europe enslavers went on to devise several other means of procuring so-called slaves:- befriending Africans and inviting them onto the European ships where they were then kidnapped; constructing castles or fortresses along the West African coast for the purpose of collecting and storing enslaved Africans; purchasing enslaved Africans from African collaborators; putting in place European or mulatto “middlemen” who were stationed in Africa to raid for and collect “slaves”; and engaging in the opportunistic kidnapping of individual Africans whenever the opportunity presented itself.

The fifth columnists wish to focus on the role played by African collaborators – as if every system of oppression does not feature some members of the victimized group who collaborate with the oppressors! However, it should be noted that even as Euro-centric a historian of the trans-Atlantic Slave Trade as Hugh Thomas, the English author of “The History of the Atlantic Slave Trade”, confirms the longevity of the practice of the direct European “stealing” or kidnapping of Africans:-

“In 1702, the Africans near Cape Mesurando complained to Willem Bosman of the Dutch West India Company that the English had been there, with two large vessels and had ravaged the country, destroyed all their canoes, plundered their houses, and carried off some of their people as slaves …. In 1716 the monarch of Fooni received five men from the Royal African Company’s chief agent on the River Gambia whose mission was to “panyar” (Kidnap) the people and make them slaves…..”.

But if the fifth columnists insist that they wish to focus on the issue of African collaborators, perhaps we could pay some attention to how some of these collaborators got involved in the process of collaboration in the first place. Let us take, for example, the case of Bandi, a 1620’s King of a state in the territory known today as Angola. Hugh Thomas tells the story in his “History of the Atlantic Slave Trade” as follows:-

“A new Portuguese governor of Luanda, Luis Mendes de Vasconelos, embarked on a campaign designed to finish with the threats of the continuously hostile Ndongo, for good or evil. He captured that monarchy’s capital at Kabasa, and the Ngola (or King) fled …… He (then) defeated a native chief named Bandi, on whom he imposed an annual tribute of one hundred slaves.”

And so, while there might have been some Africans who collaborated because they adjudged, in their own self-interest, that there was a profit to be made, there were several who had collaboration imposed on them via European conquerors demanding a tribute of slaves, or because they found themselves in a dangerous and unstable environment in which a choice had to be made between collaborating with the enslaver and saving one’s own skin, or remaining apart from the enslaver and becoming a victim of the process of enslavement that was fast engulfing the African continent.

It should also be noted that some of those who collaborated came to regret it after the full consequences of the slave trade became apparent, and ultimately attempted to resist and to extricate themselves from the tentacles of collaboration. Two examples of this phenomenon are King Afonso of the Congo and Queen Nzinga of Angola.

King Afonso had initially collaborated with the Portuguese enslavers, but by 1526 he was writing to the King of Portugal complaining that the slave dealers were depopulating his kingdom – “There are many traders in all parts of the country … They bring ruin….. Every day people are kidnapped and enslaved, even members of the King’s family” – and went on, unsuccessfully, to appeal to the Portuguese monarch to replace the slave trade with a more constructive type of trade relationship.

Queen Nzinga, for her part, went to war against the Portuguese and their slave trade regime in Angola, and in the words of Hugh Thomas – “She eventually established herself as the strongest military power in southern Angola, and the Portuguese failed to deal effectively with her…. She never became the reliable purveyor of slaves for whom successive governors of Luanda hoped.”

But the issue of African collaborators is completely routed and dismissed by the recognition that ultimately, in the long scheme of history, not even the most willing and “successful” of African collaborators benefitted materially from the trans-Atlantic slave trade or the associated system of racialised chattel slavery! Eventually, all of them were set upon, conquered and exploited by the said European enslavers who followed 400 years of slave trading with 100 years of the physical colonisation and domination of the entire African continent!

A good example of this is the Ashanti of West Africa. The Ashanti are an Akan-speaking people of central Ghana and neighbouring regions of Togo and Ivory Coast, and their traditional capital is the town of Kumasi in Ghana. During the 18th century, the rulers of the Ashanti Kingdom participated in the European orchestrated slave trade, collaborating with the Dutch in particular, and extending their empire.

The final phase of the destruction of the Ashanti kingdom took place in 1896, when the British demanded of the restored Asantahene (Prempeh1) that Asante be placed under so-called British “protection” and Prempeh refused. Once again the British army marched on Kumasi, deposed the Royal Family, and sent them and their generals into exile. Thenceforth, the Ashanti territories were incorporated into the British colony of the Gold Coast and subjected to colonial exploitation.

Clearly, no serious 21st century Reparations activist would be looking towards the Ashanti in modern-day Ghana as a target for Reparations payments. Indeed, one would not be surprised if the remnants of the Royal Family of the Ashanti are not preparing themselves to launch a claim against the British Government for the damage inflicted on the Ashanti people during and after the Ashanti wars!

No! If we are serious about Reparations we must focus on attention on the Governments and institutions that launched, orchestrated, maintained and profited immensely from the twin enterprises known as the Trans-Atlantic Slave Trade and the system of racialised chattel slavery. I refer to the national governments of Western Europe, the various Royal Families of Europe, major European multi-national corporations such as Barclays Bank and Lloyd’s of London, and elite European families such as the Leylands and the Camerons! This is where the real wealth extracted with devilish cruelty from the sons and daughters of Africa over 400 years is to be found!

Featured image: Overview of the slave trade out of Africa, 1500-1900. David Eltis and David Richardson, Atlas of the Transatlantic Slave Trade (New Haven, 2010).