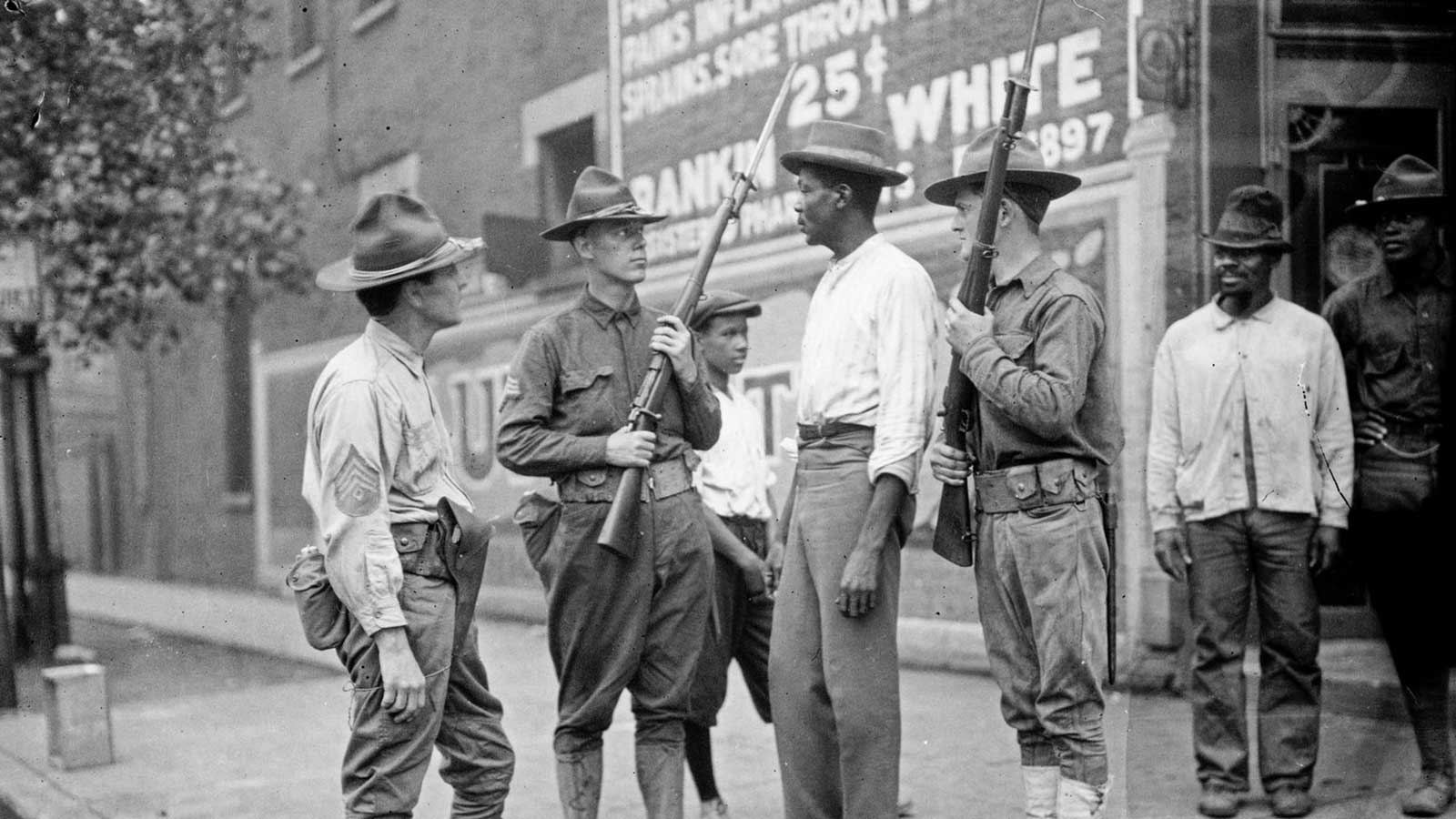 GHOSTS TOO CLOSE: This week’s 1919 DC Race Rebellion and the tragic history of DC’s Lafayette Park

Normally my morning walks don’t include going down Memory Lane, particularly one that has been invisible for almost a century. But there I was, in Lafayette Park one Saturday morning last month, right near Lafayette School and its adjoining Recreational Center in upper NW D.C., and Black history came to greet me.

I saw a crowd and I saw a sign. So I did what anyone would do in 2021: I turned on my phone and went to Facebook Live. I told my followers what I had just learned moments before: that this spot of land in my neighborhood I knew so well had originally belonged to a formerly enslaved Black man named George Pointer.

The segregated city of my youth seized the land from him in 1928, using the excuse of “eminent domain.” But it really wanted to create a white section of the city, and he was in the way. Welcome to Chevy Chase, D.C.

The city now wants to make amends in this time of so-called “racial reckoning.” So it made a gesture and renamed the center after Pointer. “I knew nothing of this!” I said into my camera. I stumbled into times past with nothing but a cell phone and a WiFi connection, but that is plenty in 2021. Time to bear witness. Slowly I walked toward the crowd while broadcasting. “Who would have guessed it?” I asked the folks at home, my live social-media audience slowly building.

I waded my way through the Black and white faces. In front of me I saw a young white girl nodding in agreement to the speaker my phone camera caught to my left. It was Janeese Lewis George, my city councilperson. “I’d like to thank the Chevy Chase community for stepping up to this moment,” she said solemnly. “It takes a lot to reckon with the past. It takes a lot to acknowledge a wrong. It’s easy — it’s easy — to move forward and act like the past isn’t there. But this community has said this is not what we are going to do. In this moment in our country, in this moment in D.C.’s history, we’re going to acknowledge the wrongs of the past. We’re going to do our best to make what we can right. And together as a community we are going to be greater because of it.” 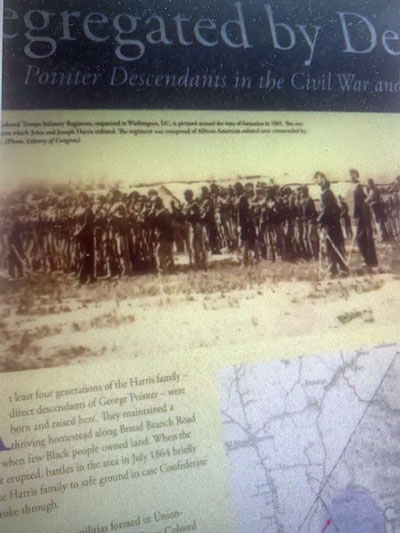 I pointed my phone at the large historic marker sign that said “Segregation By Design: Pointer Descendants in the Civil War and Today.”

Councilmember George thanked the historians and Pointer descendants who attended. “This is a moment in the right direction.”

“Reparations,” I whispered loudly to my social media audience.

Post-Tulsa, post-George Floyd, post-Breonna Taylor, post-Juneteenth national holiday America, is becoming an interesting place. Did I just run into a public apology for white supremacy? But opening up old wounds means you have to deal with the renewal of surging blood that had dried. As a pioneering reparations advocate, I’ve become used to that. But it’s sometimes difficult to talk about such things to the public, because Washington, D.C. is a place of monuments of mostly victories and ambitious, smart young people focused on gaining political power, not cultural-historical perspective.

I began to imagine about how Mr. Pointer held onto his land for 9 years after what is now known as “The Red Summer” happened, nationally, and in Washington, D.C. and before the government’s eminent domain take-over. It was a violent period that swept through 1919 because whites all across America were upset that Blacks, coming home from World War I as soldiers and men, had their backs straight (some even still wearing their uniforms!) and demanded justice for themselves and their communities. That idea made flesh rocked many cities, including the District of Columbia. It was a massacre here, but Blacks, as always, fought back against those trying to destroy their lives and communities.

I call it the D.C. Race Rebellion of 1919, and likely a key precursor to the Pointer family’s loss of their land.

Itstarted with some sort of physical altercation between Elsie Stephnick, an 18-year-old employee at the U.S. Office of Engraving and Printing, and two Black men on a Washington, D.C. street on the night of July 18. What resulted, as historian David F. Krugler characterized it, was “a mob in uniform” — a group of whites, still in their military uniforms — who formed a wartime white militia which quickly became a white terrorist lynch mob for those they suspected of the now-false rape charge.

Krugler wrote that there was “a lingering confusion over authority in the wake of war,” and the white mob was filled with “demobilized troops” who were “competing with civilians over scarce jobs amid a wave of strikes.” Season with newcomers, also looking for jobs. Add to this Prohibition era a local loophole allowing for a Baltimore-Washington wet shipping corridor. Then add to that the new self-esteem Blacks had, also returning from war with their uniforms, and a recipe for turmoil and bloodshed in more than three dozen cities — including Charleston, South Carolina, Chicago and, most notably, Elaine, Arkansas, where up to 240 Blacks were killed by white terrorism.

But in the case of my beloved D.C. — a place where Black soldiers held a Welcome Home parade on Pennsylvania Avenue just months before — Black people, civilian and ex-military, fought back with pride and precision, spending what would today be more than $200,000 on guns to defend themselves. At the end of a horrific week in late July, my ancestral community handled itself with honor; to quote the great poet Claude McKay, they did not “die like hogs, hunted and penned in an inglorious spot.”

Here are the numbers as the smoke cleared and armed Marines took to patrol Washington in the aftermath:

“Yet armed resistance, wrote Krugler, “incurred a cruel side effect: the police, courts and civil authorities typically arrested and prosecuted Blacks who had been trying to defend themselves instead of white rioters.” No surprise.

This is not ancient history. My father was born a year after the Rebellion, in 1920. My mother was born in 1923, four years after “The Red Summer” and two years after Tulsa. As a Black female lawyer, I found it intriguing that a 17-year-old Black young woman named Carrie Johnson shot and killed one of those two white police officers and, with a Black male lawyer at her side, argued self-defense, and won. What also brings it very close to home, literally, is that The Washington Post — which played a very strong role in inciting the white violence, it admits now — cites an incident occurring close to Chevy Chase Circle, near where I live!

All of this new information brings me to a slight-but-steady boil, because I consider myself very well-educated. So why did I not know anything about these incidents? Why is there hardly ever any open Black rage about such atrocities, particularly when they happen in our own neighborhoods? Where is the self-defense spirit of 1919?

Land is the basis for survival and, as I believed in my younger, more radical days and still believe today, for revolution. Lust for land not only is the reason that and how America was founded — from the coveting of Native American land and the implementation of genocide to get it, to the installment of African enslavement to work that land, and the white colonists’ violent liberation from the colonial power of white England — but it is also behind how the nation re-formed after the Civil War into the industrial country of “free states” that we recognize today.

Land lust is also behind eminent domain moves, a la George Pointer, and historic American racial massacres of the 19th and early 20th centuries because they were all based on white-Black competition over wealth and Black land was viewed by jealous whites as unobtainable treasure.

What I was reminded of in my neighborhood stroll through time that Saturday, is that we must not only fight for land, but for memory. We have to publicly remember not just the theft and the victim but who benefited and how that impacts today.

For instance, the current struggle for reparations — a fight I have been in since I was a teenager — starts with the acknowledgement of the wrongs done during the enslavement era and Jim Crow/apartheid which continue today and second, repairing what was never provided the newly freed people — land and resources.

So at some point, similar to the state of California, the cities of Tulsa and Evanston and other jurisdictions, D.C. must reckon with its past. There must be a subtraction from an entitled society due to the “violent” evil of the D.C. Race Rebellion of 1919 and the “nonviolent” evil of the eminent domain takeover from the Pointer family in 1928, that will transform that minus into a plus for D.C. Black residents today. And, its time for the proverbial Uncle Sam to pay its long overdue bills, starting with the enactment of H.R. 40, a bill to establish a federally chartered commission to study and develop reparations proposals for African Americans.

With public acknowledgment of the importance of reparations gaining ground across the U.S. and the world, I understand and even appreciate the irony of today’s gentrified D.C. teaching me about historic Black land theft — and my finding out that so much blood was spilled in my city in 1919 and that land, so much of it, taken to form a Chevy Chase space so near where I reside.

The D.C. Compensated Emancipation Act, which in 1862 freed enslaved Africans in the city of my birth and gave $300 reparations to their enslavers — seems like a long time ago, but I bet to the Pointer family and to the descendants of the victims of 1919 it seems like yesterday.

I am glad that acknowledgement of the land theft, the first step in any serious reparations work, has been taken. But listing names of victims such as Pointer — very popular in today’s “woke” culture — must only be the beginning. D.C. Councilmember Kenyan R. McDuffie’s proposed “Reparations Task Force Establishment Act of 2020 and the Sense of the Council to Declare Racism A Public Health Crisis in the District of Columbia Resolution of 2020,” introduced in the city legislature last October, would be an excellent place to start.

All of D.C. — Black, brown and white, bourgeois and working-class, progressive as well as conservative — must decide that repairing the breach from historic and multifaceted racial terrorism is a public priority, an act not only of a specific justice meted out, but a public sign of a significant, willful evolution toward a visible, consistent humanity.