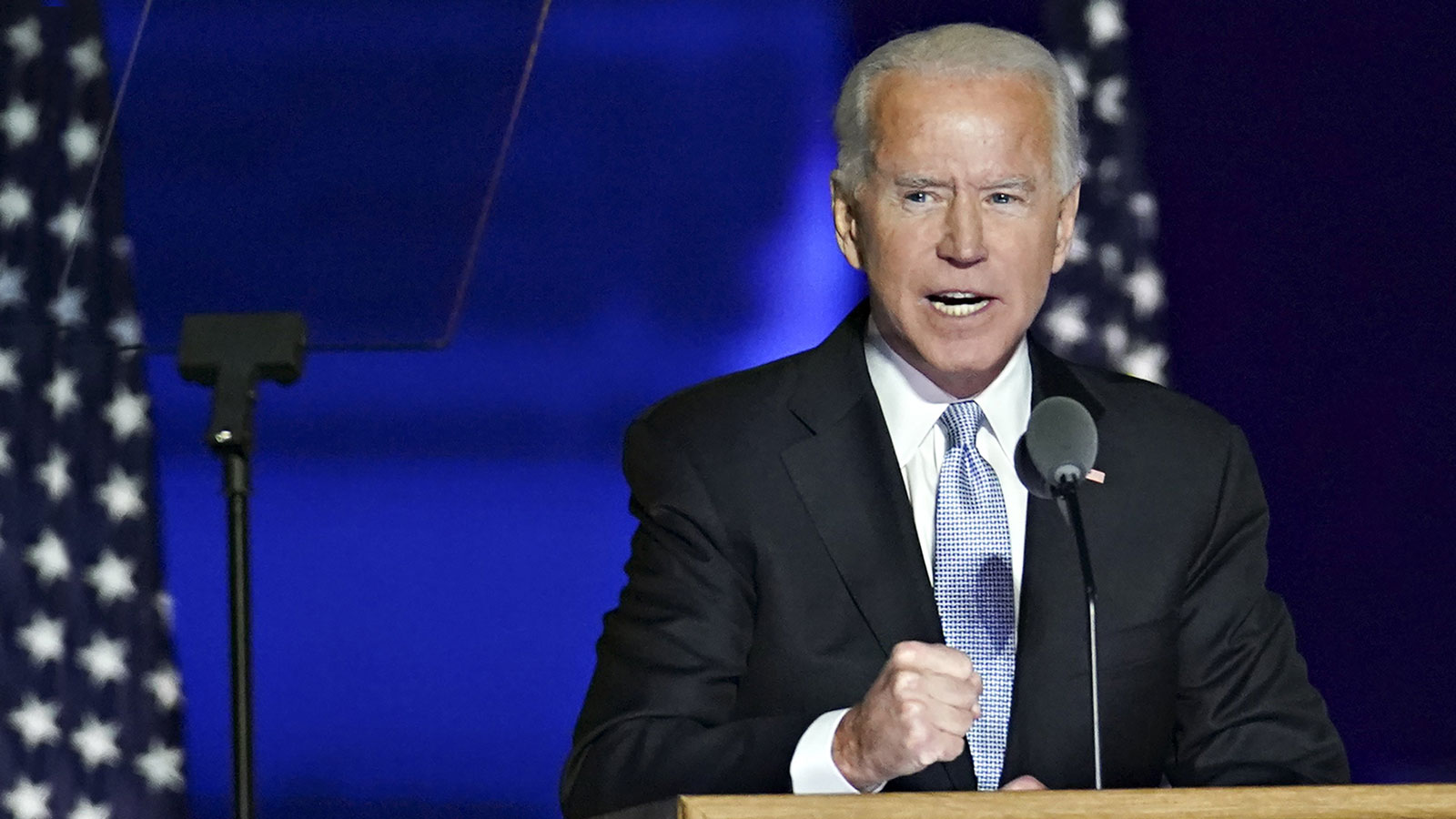 An Open Letter to President Biden: Support Reparations and HR-40 “By Any Means Necessary”

On behalf of the National African American Reparations Commission (NAARC), which is an authoritative body comprised of leading African American reparations advocates, scholars, faith, professional and political leaders, we issue an urgent call for you to place reparations for the brutal enslavement of Africans (our ancestors) and crippling post-emancipation racially exclusionary policies on your action agenda for the first 100 days of your administration. 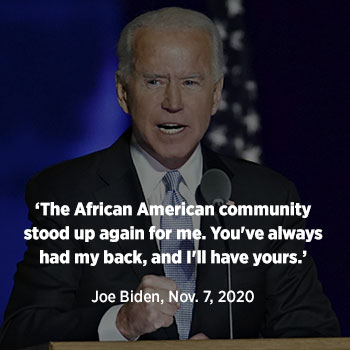 President Biden, the path to advance the issue of reparations decisively forward is clear; we strongly implore you to vigorously support the passage of HR-40 in the House of Representatives and S.40 in the Senate to establish a Commission to Study and Develop Reparations Proposals for African Americans.

Though the Democrats will narrowly control both Houses of Congress, we are deeply concerned that Minority Leader, Mitch McConnell, the ultimate obstructionist, will obstruct passage of the bill in the Senate. In that eventuality, we strongly urge you to establish an HR-40 Commission by EXECUTIVE ORDER. Mr. President, reparations for African Americans must be a priority on your 100 Day Policy Agenda, by any means necessary!

Mr. President, you may recall that during the Democratic Primary, it was African American voters in South Carolina who placed their faith and hopes for the future in you by delivering a decisive victory for your campaign, a historic turning point which cleared the way for you to become the Democratic Party’s nominee for President of the United States. We applaud you for heeding the voices of women urging you to take the historic step of nominating a woman for Vice-President. Your choice of Senator Kamala Harris as not only the first woman, but a Black woman with Caribbean and Asian heritage, was a milestone in the history of this nation.

With Kamala Harris at your side, on November 3, 2020 it was the sons and daughters of formerly enslaved Africans, led by Black women who delivered the decisive margin of victory in the key battlegrounds states of Michigan, Wisconsin and Pennsylvania and provided the critical edge that flipped Georgia from red to blue! African Americans, the Democratic Party’s most loyal constituency, were in the forefront of a multiracial Rainbow Coalition that propelled the Biden-Harris ticket into the power of the presidency; an investment in you Mr. President which African Americans made in the hope that our aspiration for the full repair and restoration of our families and communities for the generations of damages incurred from one of America’s original sins would finally be realized.

The Trans-Atlantic Slave Trade has been deemed “a crime against humanity” by the United Nations, but to date the United States has failed to hold itself accountable and responsible as an accomplice to this horrific crime. The Federal government has yet to formally apologize for its role in the holocaust of enslavement and the imposition of chattel slavery. This “peculiar institution” was responsible for the wholesale theft of wealth that fueled the commercial and industrial revolutions in this country; wealth extracted from the blood, sweat and tears of kidnapped and enslaved African bodies.

The theft did not end with the legal abolition of chattel slavery. Formerly enslaved Africans were denied the “40 Acres and a Mule” as directed by General Sherman and embraced by President Lincoln. Instead our forebears were subjected to “slavery by another name” in the form of the Convict Lease System, the peonage of share cropping, tenant farming and agricultural labor under a brutal system of “Jim crow” in the South.

Moreover, in a cruel dynamic of “Black Labor, White Wealth,” formerly enslaved Africans were denied access to the Homestead Act that brought opportunity, profit and prosperity to White Americans; equal access to the benefits from Agricultural Extension Agencies; the Federal Housing Authority which provided opportunities for affordable housing to Whites; the GI Bill despite going off to fight for freedom and democracy abroad; redlining, urban renewal and gentrification which devalued Black communities and stripped Black families of wealth.

And, now Mr. President the gross disparities, inequalities and vulnerabilities originating from the virus of systemic racism and white supremacy have once again been exposed by the horrible toll being inflicted on Black families and communities by the Coronavirus Pandemic! The long history of racial oppression, economic exploitation, intractable wealth gap, intentional denial of opportunity and assault and destruction of families and communities constitute an irrefutable case for REPARATIONS NOW! In the words of Dr. Martin Luther King, that’s “why we can’t wait.”

Mr. President, African Americans can’t wait because we have been America’s most resilient and patient patriots. Crispus Attucks shed his blood defending the declaration of independence from England; hundreds of “quasi-free” Blacks fought in the American Revolution; thousands of formerly enslaved Africans achieved “glory” casting their lot with the Union forces in the Civil War; thousands more marched off to war in Europe to fight the armed forces of Kaiser Wilhelm only to return home to be murdered in the streets of America during the “bloody red summer of 1919.

When the Western World’s democratic order was endangered by the ferocious forces of Nazi Germany’s Adolf Hitler, legions of African Americans signed up, distinguishing themselves in segregated units like the Monfort Point Marines and the famed Tuskegee Airmen, fighting for a freedom that they were often violently denied by their fellow “Americans” enforcing the racist laws and customs of segregation through lynching and murders in the South – epitomized by the assassination of NAACP Field Secretary Medgar Evers by White supremacist terrorists.

We fought in Korea and Viet Nam against foreign enemies only to face the enemies of systemic racism and white supremacy within the United States of America — including persistent police misconduct, brutality, murders and a drug war, the “New Jim Crow,” resulting in the unconscionable mass criminalization and incarceration of millions of Black bodies. In the tearful, heartfelt words of NBA basketball Coach Doc Rivers, “we keep loving America, but America just won’t love us back.”

The multi-racial, cross-generational protests across the United States this past Spring and Summer were an unprecedented response to generations of state sanctioned violence against Black people culminating with the murders of Ahmaud Arbery, Breonna Taylor, the public lynching of George Floyd and callous maiming of Jacob Blake with 7 shots in the back in broad daylight in front of his children.

As millions took to the streets, a majority of Americans expressed support for the protests as a necessary means of engaging in a national reckoning on systemic racism as a cancer on the character of this society which must be eradicated. This majority sentiment marks a sea change in the attitudes of Americans.

Reparations now enjoys growing support with the American public. Reputable national polls today indicate 75% support for reparations among African Americans and 52% among White millennials. The surging interest and embrace of reparations is reflected in the adoption of reparatory justice initiatives by municipalities, corporations, colleges/universities and families across the country. These positive developments definitively signal that Americans are increasingly aware that there is no path toward national transformation and reconciliation without redressing the egregious history of enslavement and racial oppression of African Americans. The tide of history is on our side.

Mr. President, NAARC believes that reparations for the holocaust of enslavement, chattel slavery and the derivative racially oppressive policies and practices is the paramount moral imperative of our times. While we applaud the focus on racial equity in your Lift Every Voice Agenda, contemporary legislation will be insufficient to repair the incalculable physical, cultural, spiritual, social and economic harms that have plagued Black communities for generations.

Reparations is the only overarching racial remedy that will address systemic/structural racism and advance a process for restoring the soul of America. HR-40 is the cornerstone for repair, restitution, restoration and healing of African Americans and the righteous transformation and reconciliation for this nation.

Nothing more than the recent White nationalist, terrorist insurrection and assault on the Capitol, which was built by the skilled hands of enslaved Africans, and the refusal by Senate Republicans to convict the “instigator,” speaks to the urgency of confronting systemic racism as a national priority. Indeed, the White House and the Washington Monument, proud symbols of American democracy, were constructed with enslaved Black labor. Reparations is a moral imperative whose time has come.

The late, great Honorable Congressman John Conyers, Jr., the architect of the Martin Luther King Holiday bill, first introduced HR-40 in 1989. The bill garnered less than 50 Co-Sponsors. Reparations was largely viewed as outside the mainstream of public policy.

Undeterred, Congressman Conyers faithfully re-introduced HR-40 every year until he passed the torch to the visionary and courageous Congresswoman from Houston, TX, the Honorable Sheila Jackson Lee to serve as Lead Sponsor for the bill. Under her skillful leadership a record 173 members of the House of Representatives signed on as Co-Sponsors of HR-40 in the 116th Congress — including the late iconic civil rights leaders Congressmen John Lewis and Elijah Cummings.

This powerful expression of support for HR-40 was the result of the relentless work of the Legislative Commission of the National Coalition of Blacks for Reparations in America (N’COBRA), years of dedicated engagement by the Samuel DeWitt Proctor Conference, other African American faith-based institutions and the collaborative effort of NAARC, ACLU, Human Rights Watch, Center for American Progress, Color of Change and the National Council of Churches.

In addition, the NAACP, National Urban League, Rainbow/PUSH Coalition, National Action Network and more than 300 national organizations have endorsed the “Why We Can’t Wait” Campaign in support of HR-40 along with prominent artistes like Danny Glover, John Legend and Stevie Wonder. Last but not least, in July of 2020 the U.S. Conference of Mayors passed a strong Resolution endorsing HR-40. The tide of history is on our side.

Mr. President, after a more than 400-year tortuous sojourn on these shores, filled with lynchings, massacres, the theft of Black wealth and destruction of Black communities, America’s resilient and most patient patriots are counting on your administration to act boldly to support reparations and advance HR-40 to end our long nightmare of racial oppression. We have grown impatient of waiting for America to love us back.

Mr. President, Black voters “had your back” at the most critical moments of your campaign for President. Most recently, America’s most patient patriots, the sons and daughters whose forebears picked cotton on plantations and suffered the indignities and brutality of segregation, cast the decisive ballots that delivered the majority to the Democratic Party in the Senate, thereby potentially rescuing democracy in the process!

Mr. President, with a COVID Pandemic and unchecked pandemic of police violence continuing to wreak havoc on our communities, African Americans are “sick and tired” of the Democratic Party seldom, if ever, respecting or rewarding Black voters in proportion to our support or our needs.

Mr. President, America’s most patient patriots deserve your unflinching support for HR-40 to establish a commission to study and develop reparations proposals for African Americans as a national priority for your 100 Day Policy Agenda– either by legislation or Presidential EXECUTIVE ORDER.

As was the case when our ancestors prayerfully watched and waited for Abraham Lincoln to issue the Emancipation Proclamation, America’s most patient patriots are watching and waiting for President Joseph R. Biden to enact HR-40, “by any means necessary.”

Don Rojas
DOC and Int’l Relations for the Institute of the Black World 21st Century.